Outbreaks of conflict, instability and violations of human rights must be included among the challenges considered as the United Nations General Assembly lays the groundwork for a new agenda for sustainable development, the Prime Minister of Kuwait said today.

Outbreaks of conflict, instability and violations of human rights must be included among the challenges considered as the United Nations General Assembly lays the groundwork for a new agenda for sustainable development, the Prime Minister of Kuwait said today.

“We all recognize that the maintenance of peace and security is the main entry to the rest of the doors leading to a dignified life, prosperity and human creativity,” said Sheikh Jaber Al Mubarak Al Hamad Al Sabah, as he took the podium at the General Debate of the Assembly’s 68th Session.

He is among scores of leaders set to address the annual Assembly session at which heads of State and Government and other high-level officials will present their views and comments on issues of individual national and international relevance.

“Development in all its economic, social, environmental, political and cultural aspects cannot function where peace and security are lacking or ebbing,” he added.

Among situations of prime concern, the Prime Minister pointed to Syria, where the UN Security Council has a responsibility “to start taking serious and tangible steps to ensure finding solutions that can guarantee an end to the bloodshed of the brotherly Syrian people, achieve their demands and restore security and stability in their country.”

He thanked all countries that participated in the January donors’ conference for humanitarian aid for Syria, which was hosted by his country.

In the Israeli-Palestinian conflict, he said that “only the international community has the capability to achieve the difficult formula for peace. He expressed appreciation for the efforts of the United States in attempting to achieve a breakthrough in talks and hoped that pressure on Israel would produce progress.

The Prime Minister also supported efforts to peacefully resolve questions over Iran’s nuclear programme, calling for rights to develop nuclear energy be protected while urging the country to cooperate with regulators to end “this crisis which has cast its shadow for many years on this region.”

UN reparations panel for invasion of Kuwait pays out $590 million 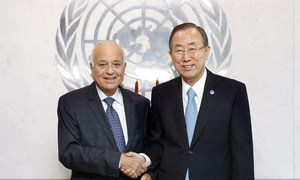 Secretary-General Ban Ki-moon today met with Nabil Elaraby, the head of the League of Arab States, reiterating the need for a political solution to end the ongoing conflict in Syria, and aid the people still trapped by the fighting and those forced to flee.