During the meeting, which was held on the margins of the General Assembly’s high-level debate, Mr. Ban and the foreign ministers of China, France, Russia, the United Kingdom and the United States underlined the importance of heightened efforts to resolve the humanitarian crisis both inside Syria and in its neighbouring countries.

They also exchanged views on the timing and other aspects of the peace conference to be held in Geneva aimed at resolving the conflict, which has claimed over 100,000 lives since it began in March 2011. In addition, more than 2 million people have fled the country, and some 4 million have been internally displaced.

According to a read out provided by Mr. Ban’s spokesperson, today’s meeting also touched on the arrangements for the mechanism to be established soon between the UN and the Organization for the Prohibition of Chemical Weapons (OPCW) to inspect and safeguard Syria’s stockpile of chemical weapons.

UN chemical weapons investigators returned to Syria today under the leadership of Swedish scientist Dr. Åke Sellström. UN spokesperson Martin Nesirky told reporters that their mission can only finalize its work programme once it has been able to assess the conditions of the sites where chemical weapons were allegedly used, and that “this assessment will clearly have to take into account the passage of time, which may limit the availability of samples.”

The team, assisted by experts from the World Health Organization (WHO) and the OPCW, visited the country last month and found “clear and convincing evidence” that Sarin gas was used in an incident that occurred on 21 August in the Ghouta area on the outskirts of Damascus in which hundreds of people were reportedly killed.

The team will now investigate the 19 March incident at Khan al-Asal, as well as two other incidents previously identified by the mission as warranting an investigation. The investigators will also discuss with the Government information that it may possess regarding allegations it reported on the use of chemical weapons pertaining to the incidents of 22, 24 and 25 August. 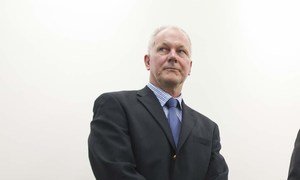 The United Nations team probing the possible use of chemical weapons in Syria will return to the country on Wednesday to complete its investigation of pending credible allegations, including the 19 March incident at Khan al-Asal, a spokesperson for the world body said today.