With 18 countries, including the United States, signing onto a new treaty regulating international trade in conventional arms today on the sidelines of the annual General Assembly high-level debate, Secretary-General Ban Ki-moon said that the total number of signatories now exceeded half of all United Nations Member States.

“Today, a number of countries signed the Arms Trade Treaty, pushing the total number of signatures to more than half of all Member States,” Mr. Ban’s spokesperson said in a statement, noting that the Secretary-General, as depository of a treaty he deems important, welcomes every signature.

“It is of particular significance that the largest arms exporting country in the world, the United States, is now also among those countries who have committed themselves to a global regulation of the arms trade,” the spokesperson stressed.

Among other provisions, the new treaty – which will enter into force once it receives 50 ratifications – includes a prohibition on the transfer of arms which would be used in the commission of genocide, crimes against humanity and certain war crimes.

The treaty was adopted by a vote in the 193-member General Assembly in April after the final UN Conference dedicated to the issue failed to garner consensus on a text. The signatures received so far today push the number of signatories to 107, with two more expected this afternoon.

A 2011 study commissioned by the UN High Commissioner for Refugees (UNHCR), entitled “The Global Burden of Armed Violence,” documented that more than half a million people die as a result of armed violence every year, fuelled in many cases by the widespread availability of weapons. Many more suffer horrific injuries and abuses, including rape, while still more are forced from their homes.

The Secretary-General believes that today’s signings “will contribute to efforts to reduce insecurity and suffering for people on all continents,” his spokesperson said, adding: “He calls upon other countries to follow suit.”

♦ Receive daily updates directly in your inbox - Subscribe here to a topic.
♦ Download the UN News app for your iOS or Android devices.
arms+trade 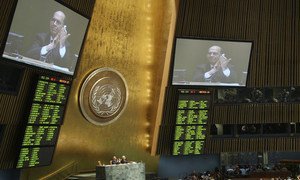