24 September 2013
World leaders at the United Nations today inaugurated a High-level Political Forum that aims to inject new energy into the global effort to boost development for all the world’s peoples in a manner that is sustainable for future generations.

The Forum replaces the UN’s Commission on Sustainable Development (CSD), which concluded its work on 20 September. The Commission was formed after the 1992 Earth Summit in Rio de Janeiro, Brazil, to generate action on a range of issues, including energy, oceans and sustainable consumption and production.

At the 2012 UN Conference on Sustainable Development – known as Rio+20 – Member States called for the change from the CSD to the High-level Political Forum to ensure that sustainable development tops the agenda of the highest levels of government and is embraced by all actors.

Countries at Rio+20 agreed that progress in prosperity and social well-being – and simultaneous protection of the environment – had not been sufficient at a time when many global challenges threaten to roll back successes in fighting poverty and severe environmental threats such as climate change loom.

At the inaugural launch today, UN Secretary-General Ban Ki-moon said that the establishment of the Forum is a significant step towards realizing the vision adopted by Member States at Rio+20.

“Your forum is a key platform for examining today’s challenges in a holistic and integrated manner,” he said. “This forum can be the catalyst for a strengthened global partnership for sustainable development, providing political leadership grounded in solid science,” he added.

To further strengthen that effort, the Secretary-General said, he had decided to create a Scientific Advisory Board, including major researchers in varied natural, social and human disciplines. The Board will be established by the UN Educational, Scientific and Cultural Organization (UNESCO).

General Assembly President John Ashe pointed out that the international community had made for itself this new High-level Political Forum, or HLPF, just as the 68th session began its discussions on laying the groundwork for the post-2015 development agenda.

“We have created this HLPF for the express purpose of delivering more effectively on our aspirations and agendas at a time when we realize that the practice of sustainability provides the only real bridge from our past to our present and our future, and from our planet to our peoples and our prosperity,” Mr. Ashe said.

Starting in 2016, the Forum will also review implementation of sustainable development by all countries and the UN system, in order to bring about accountability and a focus on action on the ground.

The President of ECOSOC, Ambassador Néstor Osorio of Colombia, stressed that the Forum “could not and should not go it alone,” but should be integrated into the full UN structure. Such coordination was the responsibility of his Council, he said.

“People have a right to expect real results from the new Forum,” said UN Under-Secretary-General for Economic and Social Affairs Wu Hongbo. “There are real challenges that must be faced.

“People need jobs, health care and education. And they also need food security, clean air and clean water. They need development that is sustainable, and the Forum has to deliver progress in all of these areas,” he added. 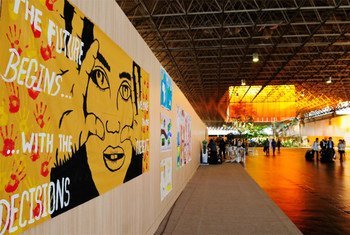 20 September 2013
Marking an important milestone, the United Nations commission on sustainable use of the world’s resources today concluded two decades of work, paving the way for the incoming High-level Political Forum to boost efforts to tackle global economic, social and environmental challenges.