20 September 2013
Marking an important milestone, the United Nations commission on sustainable use of the world’s resources today concluded two decades of work, paving the way for the incoming High-level Political Forum to boost efforts to tackle global economic, social and environmental challenges.

“The Commission’s seminal work both gave us a working definition of sustainable development and inspired the very first international conference to address both the environment and economic development simultaneously, the Rio Earth Summit,” said General Assembly President John W. Ashe in a statement delivered by his Deputy Chef-de-Cabinet, Noel Sinclair.

The UN Commission on Sustainable Development (CSD) was formed after the 1992 Summit and helped to generate action on a range of issues that led to international agreements or treaties on energy, oceans, sustainable consumption and production, and others.

Its work also led to the establishment of the UN Forum on Forests, which has advanced progress on sustainable forestry through the adoption of the non-legally binding instrument on all types of forests in 2007.

Mr. Ashe, a former President of one of the CSD sessions and a national of Antigua and Barbuda, said the Commission also gave the world’s small island developing States, and other countries in special circumstances, a “voice in this all-important conversation.”

According to Secretary-General Ban Ki-moon’s report on the lessons learned from the Commission, the contributions achieved by the CSD were also accompanied by a number of shortcomings, including the failure to fully integrate the economic, social and environmental dimensions of sustainable development.

The Commission, the report found, was also weak on its review and impact on the implementation of sustainable development.

The meeting is due to chart the course for implementing outcomes of the 2012 UN Conference on Sustainable Development, known as Rio+20, as well as accelerate progress on the eight anti-poverty targets known as the Millennium Development Goals (MDGs) and define a new development agenda post-2015.

The creation of the Forum emerged from Rio+20’s outcome document “The Future We Want,” to ensure that sustainable development tops the agenda of the highest levels of Government and is embraced by all actors.

The Forum is due to convene annually at the ministerial level under the auspices of the UN Economic and Social Council (ECOSOC) and it will, every four years, bring together heads of State to provide added momentum for sustainable development.

“One distinct benefit of the new forum is that it is designed to attract participation from representatives of all three dimensions of sustainable development, rather than chiefly from members of the environmental community,” Mr. Ashe said in today’s statement.

In an event marking the closure, the head of the United Nations environment agency (UNEP), Achim Steiner, said while the closing feels melancholy, it should be an occasion to celebrate.

“It’s an affirmation of evolution,” Mr. Steiner said, not the equivalent of extinction, as CSD is replaced by its next articulation.

“There is a realization that sustainable development—the integration of policies and actions that promote economic and social well-being that also protect the environment—have to have a prominent place on the international agenda at the highest levels,” Mr. Hongbo said. 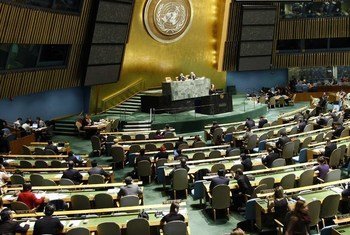