Amidst the 1,000 days of accelerated action to reach the eight anti-poverty targets known as the Millennium Development Goals (MDGs), Secretary-General Ban Ki-moon today met with leaders of two Latin American countries to discuss ways to speed up progress.

In a meeting at the United Nations Headquarters in New York, Mr. Ban discussed Panama's progress in implementing the MDGs with President Ricardo Martinelli Berrocal.

According to a UN spokesperson, the two officials also discussed citizen security and indigenous issues.

Mr. Ban commended Paraguay's achievements on the MDGs, the UN spokesperson said in a readout of the meeting, and encouraged further efforts, particularly on reducing inequalities and reaching the most marginalized communities in the South American country.

The UN chief also expressed gratitude to Mr. Cartes for Paraguay's commitment to peacekeeping operations and for its contribution to the UN peacekeeping mission in Haiti known by its French acronym, MINUSTAH.

Paraguy contributes military personnel to the Mission, according to the UN Department of Peacekeeping Operations (DPKO).

The UN chief reiterated his message of deep solidarity to the Government and the people of Mexico, who are affected by the recent hurricanes, further underlying the urgency of international action on climate change.

The two officials also discussed the implementation of the Pact for Mexico and other issues on the global agenda such as Mexico's participation in the high-level debate on international migration and development.

His spokesperson said that Mr. Ban also noted Mexico's hosting of the Inter-Ministerial Meeting of the Global Partnership for Effective Development Cooperation, as well as a thematic preparatory meeting for the World Conference on Indigenous Peoples in 2014.

In addition, Mr. Ban briefed the Foreign Minister on international efforts to deal with chemical weapons and also to end the conflict in Syria.

According to a readout of the meeting, Mr. Ban acknowledged CAF's contribution to sustainable development in Latin America and the Caribbean through its credit operations, grants and assistance to both public and private projects. 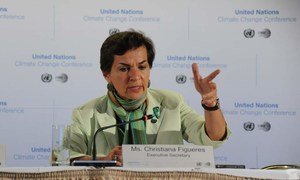 The United Nations climate change secretariat has signed an agreement with the Latin American Development Bank to increase participation in clean development projects in the region, it was today announced.