Secretary-General Ban Ki-moon today announced the appointment of Monique Barbut of France as the head of the United Nations Convention to Combat Desertification (UNCCD).

Secretary-General Ban Ki-moon today announced the appointment of Monique Barbut of France as the head of the United Nations Convention to Combat Desertification (UNCCD).

Since 2012, she was Special Advisor to the Chief Executive Officer of the Agence Française pour le Développement (AFD). From 2006 to 2012, she held the position of Chief Executive Officer and Chairperson of the Global Environment Facility and prior to that she served as Director of the Division of Technology, Industry and Economics at the UN Environment Programme (UNEP).

Ms. Barbut will replace Luc Gnacadja from Benin, to whom Mr. Ban expressed his gratitude for his outstanding contribution and commitment to the Organization.

Established in 1994, UNCCD is the sole legally binding international agreement linking environment and development to sustainable land management. The Convention addresses the arid, semi-arid and dry sub-humid areas, known as the drylands, where some of the most vulnerable ecosystems and peoples can be found.

In its10-Year Strategy, the UNCCD stated that one of its main goals was “to forge a global partnership to reverse and prevent desertification/land degradation and to mitigate the effects of drought in affected areas in order to support poverty reduction and environmental sustainability.” 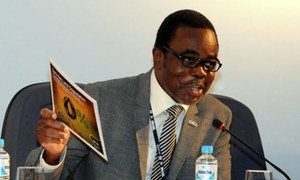 The United Nations today stressed the need to implement policies to combat drought, one of the world’s most destructive natural hazards, which causes more deaths and displacement than cyclones, floods and earthquakes combined.