8 March 2013
The United Nations today stressed the need to implement policies to combat drought, one of the world’s most destructive natural hazards, which causes more deaths and displacement than cyclones, floods and earthquakes combined.

“Despite being predictable, drought is the most costly and the deadliest disaster of our time,” said the Executive Secretary of the UN Convention to Combat Desertification (UNCCD), Luc Gnacadja, adding that the decision to mitigate drought is ultimately political.

“Governments of all drought-prone countries need to adopt, mainstream and operationalize national drought policies, based on the principles of early warning, preparedness and risk management.”

Since the 1970s, the land area affected by drought has doubled. Most recently, droughts have affected the Greater Horn of Africa and the Sahel region, the United States, Mexico, Brazil, parts of China and India, Russia and South-east Europe. In addition, 168 countries claim to be affected by desertification, a process of land degradation in the drylands that affects food production and is exacerbated by drought.

The effects of drought can last long after the rains return, with food remaining scarce and expensive and depleted water resources, eroded soils, weakened livestock, and legal and social conflicts lingering for years. Often, droughts are broken by major flood events, so they catch communities when they are most vulnerable, and add to the damages experienced.

“The frequency, intensity, and duration of droughts are expected to rise in several parts of the world as a result of climate change, with an increasing human and economic toll,” said the Secretary-General of the World Meteorological Organization (WMO), Michel Jarraud. “We simply cannot afford to continue in a piecemeal, crisis-driven mode. We have the knowledge and experience to reduce the impact of drought. What we need now is the policy framework and action on the ground.”

To address this issue, WMO, UNCCD and the Food and Agriculture Organization (FAO) will hold a High-Level Meeting on National Drought Policy next week in Geneva to focus on drought preparedness and management policies.

The five-day meeting will bring together policymakers, development agencies and leading scientists and researchers, and will seek to encourage countries to move from crisis management to disaster risk reduction.

“More extreme and frequent droughts resulting from climate change are having devastating food security impacts, especially in the most vulnerable regions of the world,” said FAO Director-General José Graziano da Silva. “To buck this trend, we must build resilient, ‘drought-resistant’ communities. This means not simply reacting after the rains fail, but investing over the long-term, so that when drought does hit, people and food systems can weather the blow.”

At Headquarters and around the globe, UN celebrates International Women’s Day 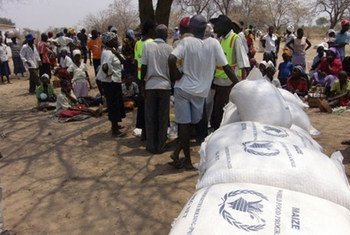 30 November 2012
The United Nations food relief agency today announced it is scaling up its efforts to assist more than 3.5 million people in drought-hit areas of southern Africa, particularly in Malawi, Zimbabwe and Lesotho, who are now facing the start of the hunger season.