11 September 2013
The United Nations has condemned the killing of two aid workers in the Central African Republic (CAR), and urged all parties to ensure the protection of civilians and respect for humanitarian law.

“I express my deepest condolences to the family and friends of the victims, and to all our humanitarian colleagues tirelessly providing assistance and protection to people in need in CAR,” said Kaarina Immonen, UN Humanitarian Coordinator in the country.

“It is shocking that aid workers have been targeted and these killings must be condemned in the strongest terms.”

The two aid workers were in Bossangoa for the Agency for Technical Cooperation and Development (ACTED). Bossangoa is located 300 kilometres north of the capital Bangui, when they were targeted over the weekend.

Ms. Immonen urged authorities and all parties to the conflict to “ensure the protection of civilians and the respect for international humanitarian and human rights law, as well as of humanitarian personnel and assets.”

In addition, the absence of the rule of law, grave human rights violations and deplorable attacks against humanitarian personnel and assets have prevented life-saving aid from reaching people in need.

“I express my deepest condolences to the family and friends of the victims, and to all our humanitarian colleagues tirelessly providing assistance and protection to people in need in CAR,” Ms. Immonen added. 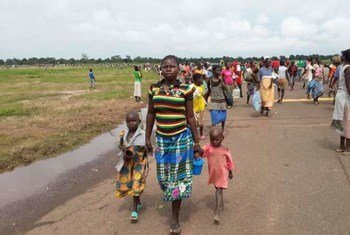