Members of the Office of the UN High Commissioner for Refugees (UNHCR), along with the UN Office for the Coordination of Humanitarian Affairs (OCHA), travelled last week to the town of Paoua, 500-kilometres north of the capital, Bangui. They found seven villages burned to the ground and deserted – and an eighth partially burned – with villagers hiding in the bush.

“Local people spoke of physical assaults, extortion, looting, arbitrary arrest and torture by armed men,” UNHCR spokesperson Melissa Fleming told reporters in Geneva. “The villagers said their actions may have been in retaliation for a clash last month with self-defence groups who were trying to protect their families and property.”

Ms. Fleming said UNHCR had registered over 3,000 displaced persons in the region – adding to the estimated total of at least 206,000 displaced across the country since December. Tens of thousands more have fled to Chad and Cameroon.

“We are, in general, increasingly worried about the civilians caught in the middle of the fighting and who are at the mercy of anyone with a gun,” Ms. Fleming said. “We repeat our call to the authorities in Central African Republic, and to all armed groups, to protect civilians and make sure aid agencies can reach people in need.”

In the village of Bedengui, 65 kilometres from Paoua, UNHCR staff found people mourning the kidnapping and murder of four family members.

UNHCR is currently distributing relief supplies in the Paoua region such as tarpaulins, kitchen sets and mosquito nets, given the threat of malaria. The UN Children’s Fund (UNICEF and the World Food Programme (WFP) are also delivering aid, shelter and survival supplies to affected communities. 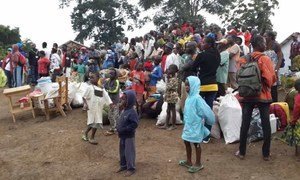 United Nations humanitarian agencies today voiced deep concern over the situation in the Central African Republic (CAR), where hundreds of thousands of people continue to be affected by lawlessness and insecurity, and widespread fear is reported among residents.