5 June 2013
With tons of edible produce squandered each year – never making it from farm to fork – senior United Nations officials are issuing a call on World Environment Day to “reduce your foodprint!,” urging everyone to help curb the massive loss and waste inherent in today’s food systems.

With tons of edible produce squandered each year – never making it from farm to fork – senior United Nations officials are issuing a call on World Environment Day to “reduce your foodprint!,” urging everyone to help curb the massive loss and waste inherent in today’s food systems.

“On this World Environment Day, I urge all actors in the global food chain to take responsibility for environmentally sustainable and socially equitable food systems,” Secretary-General Ban Ki-moon said in his message for the Day.

Currently at least one third of all food produced fails to make it from farm to table.  “This is foremost an affront to the hungry, but it also represents a massive environmental cost in terms of energy, land and water,” the UN chief said,  noting that in developing countries, pests, inadequate storage facilities and inefficient supply chains are major contributors to food loss.

Those who grow for export are also often at the mercy of over-stringent expectations of buyers who place a premium on cosmetic perfection.  In developed nations, food thrown away by households and the retail and catering industries rots in landfills, releasing significant quantities of methane, a powerful greenhouse gas.

“Food loss and waste is something we can all address,” Mr. Ban said, noting that the United Nations Environment Programme (UNEP), the UN Food and Agricultural Organization (FAO) and public and private sector partners have launched the “Think.Eat.Save: Reduce Your Foodprint” campaign to raise global awareness and showcase solutions relevant to developed and developing countries alike.

The Secretary-General explained that infrastructure and technology can reduce the amount of food that perishes after it is harvested and before it reaches the market. Governments in developing countries can work to improve essential infrastructure and maximize trade opportunities with neighbours; developed nations can support fair trade and rationalize sell-by dates and other labelling systems; businesses can revise their criteria for rejecting produce; and consumers can minimize waste by buying only what they need and re-using left-over food.

The current global population of 7 billion is expected to grow to 9 billion by 2050.  But the number of hungry people need not increase. “By reducing food waste, we can save money and resources, minimize environmental impacts and, most importantly, move towards a world where everyone has enough to eat,” Mr. Ban said.

The scale of the food waste issue is highlighted in a new report, released today to coincide with World Environment Day (WED), which found out that one out of every four calories produced by the global agricultural system is being lost or wasted.

According to the study ‘Reducing Food Loss and Waste,’ which was produced by the World Resources Institute and UNEP and draws from FAO research, the world will need about 60 per cent more food calories in 2050 compared to 2006 if global demand continues on its current trajectory.

“It is an extraordinary fact that in the 21st century, close to 25 per cent of all the calories linked with growing and producing food are lost or wasted between the farm and the fork—food that could feed the hungry, food that has required energy, water and soils in a world of increasing natural resource scarcities and environmental concerns including climate change,” said Achim Steiner, UNEP Executive Director, drawing attention to the absurdity that high volumes of perfectly edible produce are never consumed.

“The menu of case studies and recommendations in this study provide national and community-led solutions that ally smart policies with traditional knowledge, modern science and common sense,” he added, referring to the study’s recommendations.

Through this year’s WED campaign, the UN and its partners are inviting people across the world to join in an effort to raise awareness and take practical actions “whether in your home, whether on your farm, whether in the supermarket, in a canteen, in a hotel or anywhere else where food is prepared and consumed.”

This year’s global host for the Day is Mongolia, one of the fastest growing economies in the world and one that is aiming for a transition to a green economy and a green civilization. “It is not a big waster or loser of food, but the traditional and nomadic life of many of its people does have some ancient answers to the modern-day challenge of food waste,” Mr. Steiner said.

The Mongol General Chinggis Khan and his troops utilized a traditional food called “borts” to gallop across Asia without depending on elaborate supply chains. Borts, he explained, is basically concentrated beef equal to the protein of an entire cow but condensed and ground down to the size of a human fist. “This remarkable method of food preservation, without refrigeration, meant a meal equivalent to several steaks when the protein was shaved into hot water to make soup,” he said.

In advance of WED, UNEP has also been compiling similar examples of traditional and indigenous knowledge from familiar techniques such as pickling or salting fish to the smoking of meat, the drying of fruit and other techniques employed by the Inuits to preserve seabirds which are served later at feasts and weddings.

WED is being observed in many countries today, including in Iraq, where at least 1.9 million people are food deprived and 4 million are vulnerable to food insecurity. Resident Humanitarian Coordinator Jacqueline Badcock stressed that taking care of the environment is crucial to address food insecurity in the country, which increasingly relies on imports to meet its food needs due to poor environmental management.

“It is essential that the Government continues to put in place the policies and good environmental practices that will re-establish Iraqi agriculture and ensure food supply for the most vulnerable,” she said. 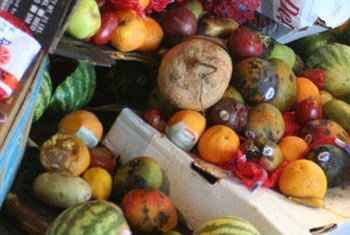 21 May 2013
Fermenting birds, naturally freeze-drying potatoes and squeezing meat on a saddle are some of the traditional methods used by cultures around the world to preserve food highlighted today by the United Nations environment agency, which is stressing the importance of reducing food waste.