4 September 2013
Organized criminal activities such as migrant smuggling, ivory trafficking and maritime piracy are increasingly pressing threats in Eastern Africa and must be tackled through a range of measures both within the region and in the markets where illicit goods will end up, according to a United Nations report released today.

The report, Transnational Organized Crime in Eastern Africa: A Threat Assessment, was produced by the UN Office on Drugs and Crime (UNODC) and highlights the principal crime threats facing the region as well as their costs to society.

According to the report, more than 100,000 people were smuggled out of the region last year alone, generating over of $15 million for organized criminal networks operating on the maritime crossing from the Horn of Africa. Many migrants are driven in part by high levels of conflict and poverty, and as they try to escape their situation they are vulnerable to abuse, confinement, extortion and rape from smugglers.

Ivory poaching, which results in up to 154 metric tonnes being taken annually, led to an additional $30 million in illicit revenue just from Asian markets. Recent research indicates that the rate of poaching in the region is threatening the local elephant population. Between 5,600 and 15,400 elephants are poached in Eastern Africa annually, producing between 56 and 154 metric tons of illicit ivory. Two thirds of these were destined to Asia.

Meanwhile, drugs are becoming an increasingly lucrative illicit trade, with up to 22 tonnes of heroin being trafficked to and through the region every year. While heroin has been trafficked to and through Eastern Africa since at least the 1980s, a series of recent large seizures suggest that this flow has increased. Over the past three years, more heroin was seized than in the previous 20 years and in the first five months of 2013, the seizures exceeded those of the total previous 24 months.

Finally, piracy in Somalia was assessed to be worth an estimated $150 million in 2011, equivalent to almost 15 per cent of the country’s gross domestic product. In recent years, however, progress has been made in tackling this issue as international policies have contributed to a dramatic decline in piracy.

While in April 2009 pirates hijacked 16 ships, two years later this averaged less than one per month, the report said. Effective intervention has also forced pirates to move further away from the coast. In 2005, the average successful pirate attack was 109 kilometres from the Somali coast. Last year it was 746 kilometres.

According to the report illicit markets that affect Eastern Africa often originate or terminate on other continents. As a result, purely local interventions are inadequate to resolve the underlying problem. Optimally, these markets should be evaluated and strategically addressed at a global level, but to protect Eastern Africa, local law enforcement must also be strengthened. 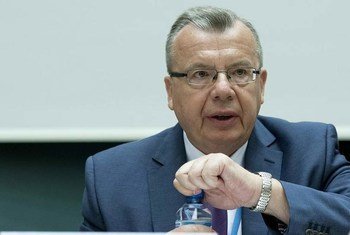 22 July 2013
The head of the United Nations Office on Drugs and Crime (UNODC) today stressed the links between combating these two significant threats and achieving a sustainable world, during discussions on the future global development agenda.