4 September 2013
One in five households in developing countries are now connected to the Internet but more must be done to bridge the digital divide with the developed world, the President of the General Assembly said today opening a discussion on boosting regional telecommunications transit routes.

Vuk Jeremic said that information and communication technologies (ICT) can contribute to the eight anti-poverty targets known as the Millennium Development Goals (MDGs) and a sustainable development agenda to follow after 2015.

As such, he urged Governments to continue working in public-private partnership to expand broadband infrastructure in the developing world, and stimulate efforts to provide local content and develop regionally-appropriate software applications.

“One-fifth of all households in developing countries are now hooked up to the internet - up from 13 per cent just three years ago,” Mr. Jeremic told a panel entitled ‘Improving connectivity in Eurasia,’ organized by Azerbaijan.

“This is a significant achievement, but much more needs to be done in order to overcome the digital divide with the developed world, where 78 per cent of homes are linked to the internet - many through affordable and reliable broadband networks,” the GA President noted.

Ahead of the panel discussion, the Assembly held a plenary meeting where it adopted a resolution by which the world body invites UN Member States to explore ways to support the proposal by Azerbaijan to establish the Eurasian Connectivity Alliance with the International Telecommunication Union (ITU).

The aim will be to promote the development of telecommunication transit routes in the region and improving the coordination between the Governments, private sector, civil society and international development institutions.

In his remarks to the panel discussion, Mr. Jeremic, said ICTs “can help establish a more level playing field, expediting the integration of developing countries into the global economy - especially the LDCs [least developed countries], nations with few natural resources, and post-conflict countries.”

He added that ICTs can also increase opportunities for education and professional training, contribute to delivery of healthcare and other essential services and assist with business and technical fields.

“Technology has never been an end in itself, but a means—an opportunity—to improve the human condition, when put to good use,” the Assembly President said.

The UN is currently amidst 1,000 days of accelerated action to reach the targets set by the MDGs, including making more widely available the benefits of new technologies, especially ICTs.

Later this month, the General Assembly will host a high-level special event to follow up on those efforts.

In today’s meeting, the 193-member GA is expected to act on resolution on support for establishing a Eurasian Connectivity Alliance with the UN International Telecommunication Union (ITU) for improving the development of “regional telecommunications transit routes.”

UN hosts conference on safeguarding freedom of expression on the Internet 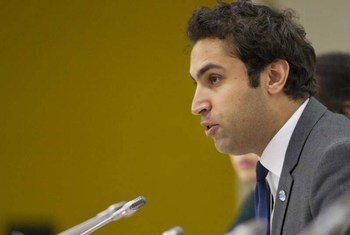 6 June 2013
Information and communications technology (ICTs) have the potential to empower young women and girls across the world and help them engage with their communities, participants at a United Nations online forum said today.