30 August 2013
The United Nations food relief agency is helping thousands of people displaced by increasing violence perpetrated by armed groups in the Central African Republic (CAR), according to its spokesperson.

“The security situation in CAR had deteriorated over the past weeks but that had not yet had a direct impact on WFP programmes, although it was a concern,” UN World Food Programme (WFP) spokesperson Elisabeth Byrs told journalists in Geneva.

Security incidents are still reported in the capital, Bangui, and across the country, and crime remains a major threat with the humanitarian community increasingly a target of looting and attacks by armed groups, she added.

Despite the security concerns, WFP said it is trying to scale up operation and expand the number of its sub-offices to assist in the coming weeks more than the 81,000 people assisted this month.

“During the first week of August, WFP provided 255 metric tonnes of food assistance to 8,105 beneficiaries in the Damara-Sibut axis, Bambari and Batalimo,” Ms. Byrs said.

The UN agency said it needs an estimated at 3,830 metric tons for an additional 118,500 beneficiaries.

Its food deliveries could be impacted by the recent closure of the border between Cameroon and the CAR after the Séléka rebel coalition attacked a border town of Toktoyo and killed a Cameroonian border officer, the spokesperson said.

Meanwhile, the UN refugee agency (UNHCR) said a wave of security crackdowns and fighting that had caused displacement to the airport in Bangui.

Spokesperson Adrian Edwards said people were starting to leave the airport and return to their neighbourhoods, “however, the formation of vigilante groups was a new concern”.

Addressing the Security Council earlier this month, Under-Secretary-General for Humanitarian Affairs Valerie Amos warned that CAR is “not yet a failed State but has the potential to become one if swift action is not taken.” 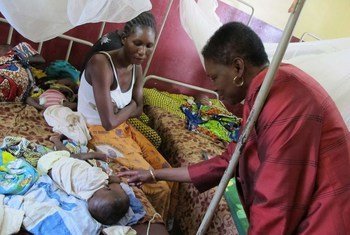 14 August 2013
Senior United Nations officials today raised the alarm about the situation in the Central African Republic (CAR), which is marked by ongoing insecurity and instability as well as a rapidly growing humanitarian emergency.