In Republic of Korea, Ban highlights transformative power of education

Speaking at a UN Academic Impact event in Seoul, Republic of Korea (ROK), Mr. Ban said the UN is committed to help children obtain access to quality education. There are currently 57 million children out of school worldwide.

“Education will give [children] a better life – and give us all a brighter future,” Mr. Ban said. “This is especially true for girls. For every year that you educate a young woman, her income goes up by as much as 20 per cent. A World Bank study of 100 developing countries found that putting more girls in high school significantly boosts per capita income growth.”

The UN Academic Impact is a global initiative that aligns institutions of higher education with the world body in actively supporting ten universally accepted principles in the areas of human rights, literacy, sustainability and conflict resolution. The Academic Impact also asks each participating college or university to actively demonstrate support of at least one of those principles each year.

“We are drawing on the wisdom of people from around the world – development experts and government officials, but also grassroots groups, ordinary citizens, and students,” Mr. Ban said, calling on members of academia to continue collaborating with the UN.

“Around the world, universities are teaming up to support the global mission of the United Nations. I urge you to do more to help the Academic Impact live up to its name and make a real difference in our world.

While in the ROK, Mr. Ban met separately with the country’s Prime Minister, Chung Hong-won, and President Park Geun-hye, with whom he exchanged views on the Korean Peninsula.

Mr. Ban commended the recent constructive efforts of the ROK Government to normalize the operations in the Kaesong Industrial Complex, as well as to provide humanitarian assistance to the most vulnerable, in particular, children in the Democratic People’s Republic of Korea (DPRK) regardless of the political situation.

In his meeting with Ms. Park, Mr. Ban also discussed Syria, including allegations about the use of chemical weapons there, Egypt and the Middle East.

♦ Receive daily updates directly in your inbox - Subscribe here to a topic.
♦ Download the UN News app for your iOS or Android devices.
Republic of Korea 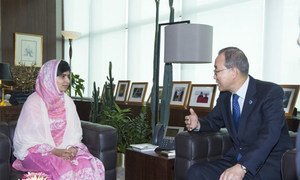