24 July 2013
The Security Council today extended for 16 months the mandate of the United Nations expert panel monitoring compliance with sanctions against Somalia and Eritrea, while further easing funding and equipment restrictions on the UN and European Union missions in the region.

In a resolution adopted this morning, the Council asked Secretary-General Ban Ki-moon to re-establish the eight-member Monitoring Group on Eritrea and Somalia until 25 November 2014.

The panel, which monitors compliance with the embargoes on the delivery of weapons and military equipment to Somalia and Eritrea, also investigates any seaport operations in Somalia that could generate revenue for the Islamist militant group known as Al-Shabaab that controls some Somali territory.

The Security Council in 1992 imposed an embargo on all deliveries of weapons and military equipment to Somalia. This past March, the Council partially lifted the weapons ban for one year to boost the Government’s capacity to protect areas recovered from the militant group Al-Shabaab and defend against fresh attempts by such groups to destabilize the country.

It decided that the arms embargo would not apply to arms or equipment sold or supplied solely for the development of the Government’s security forces, but it kept its restrictions in place on heavy weapons, such as surface-to-air missiles.

Today’s resolution reminds the Federal Government of Somalia that it is required to notify the Council’s sanctions committee at least five days in advance of any such deliveries and provide details of the transactions. Alternately, Member States delivering assistance could make the notification after informing the Government of its intentions in that regard.

The text decides that until 6 March 2014, the arms embargo on Somalia would not apply to weapons, military equipment, training or advice intended to develop Somalia’s security forces. Nor would it apply to military supplies and aid to the UN Assistance Mission in Somalia (UNISOM), African Union Mission in Somalia (AMISOM) and its strategic partners, the EU Training Mission in Somalia (EUTM) or to Member States and organizations working to combat piracy off the coast of Somalia.

The 15-member Council also expresses its “deep concern” at reports of continuing violations of the charcoal ban by Member States and stresses that it is willing to take action against those violate the ban.

It also reiterates that a charcoal export ban applies to all charcoal from Somalia, whether or not it originated in the country, and requested AMISOM to support and assist Somali authorities in preventing the export of charcoal from the country.

In addition, the resolution includes language renewing a humanitarian exemption until 25 October 2014. The exemption is for “payment of funds, other financial assets or economic resources necessary to ensure the timely deliver of urgently needed humanitarian assistance in Somalia” by the UN and its implementing partners.

The text also encourages the Federal Government to mitigate the risk of the petroleum sector becoming a “source of increased tension”.

Council members encouraged the Government “to address corruption and hold perpetrators accountable,” and reiterated their willingness to take action against individuals involved in misappropriation of public resources. 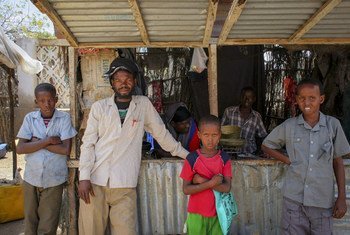 19 July 2013
The top United Nations humanitarian official in Somalia today said that an additional $20 million in crisis funding comes at an opportune time to support the country’s most vulnerable people, particularly children.