WFP/Challiss McDonough
WFP Executive Director Ertharin Cousin (right) meets with a group of women farmers during her visit to Rwanda.

“Here in Rwanda, WFP is providing the life-saving food assistance that we are known for to tens of thousands of refugees, but we and our partners are also supporting community-based agriculture and livelihoods projects that assist the poorest and most vulnerable Rwandans as they build a brighter future for their families,” said the agency’s Executive Director, Ertharin Cousin, at the end of her three-day visit to the country.

“When speaking with small-scale farmers and rural families, I could see very clearly the difference that rural development initiatives have made in helping people improve their lives.”

Ms. Cousin said the progress made on development in Rwanda illustrates the importance of close and effective partnerships between UN agencies, communities and government in helping in empowering people to lift themselves out of poverty.

“I met one woman farmer who started with nearly nothing, and now has become so successful that she’s been able to build her family a new house, and put her children though school,” said Ms. Cousin, who also met with displaced persons and refugees on both side of the border shared by Rwanda and the Democratic Republic of the Congo (DRC).

During her visit, Ms. Cousin also visited the Nkamira refugee transit centre and a successful terracing and watershed management project in Rulindo district, in northern Rwanda. She also visited and spoke with farmers in eastern Rwanda who belong to an agricultural cooperative in Kirehe district through which they are selling their surplus maize and beans to WFP via the Purchase for Progress initiative, known as “P4P”.

P4P aims to use WFP’s purchasing power to help connect smallholder farmers to markets. In Rwanda, the programme has grown from a WFP project into a national initiative, boosting productivity and improving the lives and livelihoods of small-scale farmers.

Since 2011, WFP has purchased 33,000 metric tons of combined food commodities – maize and beans – worth $15.5 million, through a combination of P4P purchases and regular food procurement.

WFP and the Rwandan Government are also exploring ways to link the P4P programme to food-for-education initiatives, providing students with a daily school meal grown in their own communities and turn schools into regular customers for local farmers.

This was Ms. Cousin’s first visit to Rwanda as WFP Executive Director. While in the country, she also met with top Government officials, including Prime Minister Pierre Damien Habumuremyi, and with the heads of UN agencies in Rwanda. 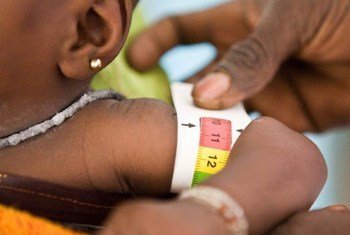 8 June 2013
United Nations officials have welcomed the funds pledged and political agreements reached at the Nutrition for Growth summit, held today in London, as a new opportunity to ensure millions more infants and pregnant women have better diets, and to reduce cases of stunting and deaths from malnutrition.