IRIN
Hundreds people lost their lives when an eight-story building outside Dhaka, Bangladesh, collapsed on 24 April, 2013, trapping thousands of mostly garment workers inside.

22 July 2013
The United Nations labour agency today said that amendments to the Bangladesh Labour Act “will hopefully prove to be a first step” in addressing workers’ rights and boosting occupational safety and health, but urged the Government to advance the reforms to more comprehensively protect workers.

“The ILO calls on the Government of Bangladesh to take the further steps necessary to fulfil its obligations under ratified conventions, as well as its commitments on labour law reform made at the Organization’s International Labour Conference in June and commitments made in the Sustainability Compact agreed with the EU on July 8,” the UN International Labour Organization (ILO) said in a statement.

“Important additional labour reforms will be required to fulfil the Government’s commitments and obligation and these should be undertaken as a matter of urgency,” the Geneva-based agency said, reiterating its willingness to develop and adopt further legislative proposals to address the conclusions and recommendations of the ILO supervisory bodies.

“The ILO also offers to work with urgency on the regulations required to implement the amendments and to build the capacity of the labour inspectorate to assume its new responsibilities,” the UN agency said.

Bangladesh adopted the amendments to its Labour Act 2006 on 15 July, including ILO Conventions 87 and 98 on freedoms of association and collective bargaining. This past April, the Rana Plaza factory building collapsed on the outskirts of Dhaka, the capital, killing more than 1,000 people, mostly female workers. The garment industry employs some 3-5 million workers in the country.

Among the approved revisions in the country’s labour laws, the amendment include several provisions to improve workplace safety, such as the creation of safety committees in factories of 50 workers or more. Personal safety equipment will now be required and provisions now also require the establishment of health centres in workplaces of more than 5,000 employees.

The revisions also eliminated the previous obligation to send to employers the names of union leaders when a trade union is registered, and it allows workers to call on outside experts for advice during collective bargaining.

“An initial review suggests that the amendments did address some of the ILO’s specific concerns, while falling short of several important steps called for by the ILO supervisory system to bring the law into conformity with ratified international labour standards,” the UN agency said.

Based on an unofficial translation of the adopted amendments, ILO said the revised laws do not address a number of concerns, including a 30 per cent minimum membership requirement to form trade unions and the extension of the freedom of association and collective bargaining to workers in labour-intensive export processing zones.

The UN agency also noted that the amendments do not prohibit discrimination in employment or remuneration, nor do they prohibit debt bondage by children or compulsory labour as a form of punishment.

The ILO’s critiques are based on an unofficial translated of the adopted amendments, but the UN agency said its supervisory machinery will officially review the amended legislation later in the year. 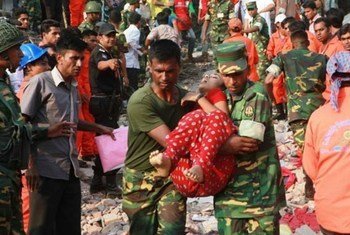