22 July 2013
An independent United Nations expert on foreign debt and human rights has called on Japan to adopt a rights-based approach to its international development cooperation, following a four-day mission to the country.

“The Government should make a more explicit commitment to incorporating human rights principles into the design, implementation and monitoring of its international development cooperation policies,” said Independent Expert Cephas Lumina.

After the visit, which concluded on Friday, Mr. Lumina recommended that the Government adopt “a policy statement on human rights and development cooperation,” as other leading providers of official development assistance (ODA), such as Australia, Canada, Finland, Germany, Norway, Sweden, the United Kingdom and the United States, have done.

“By focusing on equality, non-discrimination, participation, empowerment, accountability and transparency, a rights-based approach would improve the sustainability and effectiveness of Japanese development cooperation,” he added.

He also called for more transparency concerning the loan agreements concluded and export insurance provided by these institutions.

“Consideration should be also given to ensuring more comprehensive regulation of Japanese foreign business activities to address issues such as tax evasion and other forms of capital flight which undermine the capacity of countries to mobilize sufficient domestic resources for their development,” he added. “Such an approach would be consistent with the principle of 'self-help' which is a cornerstone of Japan's ODA policy.”

It was noted that Japan's ODA budget has been declining in recent years. Compared to 1997, the ODA budget for 2013 has been cut by 52.3 per cent. In 2012, only 0.17 per cent of gross national income (GNI) was devoted to development cooperation – well below the UN target of 0.7 per cent of GNI.

While acknowledging the economic, fiscal and humanitarian challenges the country has faced in recent years, Mr. Lumina urged the Government to adopt a road map for reaching the UN target.

He commended the Government for establishing a framework for regular dialogue with Japanese non-governmental organizations (NGOs), but urged it to also engage in policy dialogue with those in recipient countries and to extend support schemes available to Japanese NGOs to them.

“The involvement of local NGOs in recipient countries would foster transparency and accountability in the implementation of ODA-supported projects and contribute to empowerment of local communities,” he noted.

Mr. Lumina also reminded the Government to follow up on its commitment to establish an independent National Human Rights Institution.

Independent experts, or special rapporteurs, are appointed by the Geneva-based UN Human Rights Council to examine and report back on a country situation or a specific human rights theme. The positions are honorary and the experts are not UN staff, nor are they paid for their work. Mr. Lumina will present his findings in a report to the Council in March 2014. 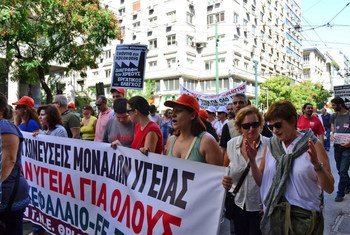 1 May 2013
Greece and its international bailout lenders must adopt a human rights-based approach to economic reform, a United Nations expert reiterated today, warning that some austerity measures are undermining people’s access to jobs, health, water and energy.