“If current trends continue, migration may enhance current inequalities between various categories of States,” Vuk Jeremić said in remarks to the informal interactive hearings on international migration and development held at UN Headquarters in New York.

“It could even result in what some demographers have called the 'spectre of ghost countries – of nations that will simply become devoid of necessary human resources to carry on in the longer term',” he added.

Globalization has resulted in the advent of a new era of mobility, said the President. Over the last decade, the total number of international migrants has increased from 150 million to 214 million, creating both challenges and opportunities for societies throughout the world.

In this context, the Assembly will hold, on 3 and 4 October, the second High-level Dialogue on International Migration and Development in New York, following the first one held in 2006.

“I would therefore strongly encourage you to discuss not only how you can shape preparations for the forthcoming High-level Dialogue, but also how to influence the way Member States could incorporate the issue of migration into their debate on how to bridge the gap between overall rich and poor countries,” Mr. Jeremić stated.

He noted that the UN has created agencies to address many pressing global issues – from arms trafficking, nuclear power, and human rights, to telecommunications, intellectual property, and climate change.

“But there is no international mechanism that seeks to regulate migration flows,” he continued. “No accepted criteria have been established; no universal guidelines endorsed. There is literally no global governance on an issue that will fundamentally affect the future of virtually every nation on Earth.

“I believe that in the time ahead, Member States should begin their work on creating a basis for coordination on a topic that stands at the crux of sustainable development, as to ensure that migration does not turn into a zero-sum game, where the progress of any nation is held back by that of another.”

He also noted that migration is one of the few constants of human history. “All of us trace our roots to somewhere else – some have to go back just one or two generations; others, further rearward. But virtually everyone's forbearers, at some point over the course of millennia, took the courageous and difficult decision to give up everything that was familiar, in order to seek greater opportunity in territories unknown.”

The subject of migration has stirred passionate debates, because for all the good it can bring, it also generates social tensions, the President stated, adding that recent arguments about how to integrate newcomers in a number of Member States have proven especially controversial.

In his remarks to the meeting, Deputy Secretary-General Jan Eliasson said the benefits of migration can only be fully harnessed, and the situation of migrants tangibly improved, with “sustained and strong partnerships as well as strategic cooperation between different actors.”

The role of civil society is fundamental, he added. Labour unions and employers' organizations play a critical role in immigration reform; advocacy groups ensure that the voices of migrants are heard and heeded; diaspora organizations highlight the diversity of many contributions which migrants can make to societies; and the academic community has greatly contributed to refuting long-held myths and prejudices by grounding the migration debate in evidence.

“The challenge is to share this evidence with the public at large to dispel negative perceptions and often-stated stereotypes,” said Mr. Eliasson. “We need to engage the media to make the public and policy makers aware of the vital and positive role migrants can play in helping build and invigorate nations, economies and cultures.”

The deputy UN chief highlighted the need to: improve engagement within and cooperation between States; ensure that migration policies are based on facts; and promote the integration of migrants into societies and economies.

Additional priorities are to coordinate national migration policies to ensure that labour market and development considerations are taken into account when planning future migration, and to develop a framework for managing migration from countries and regions affected by crisis and violence. 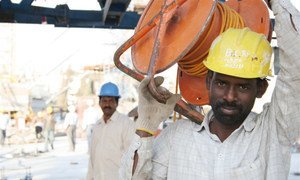 Governments should recognize the wide-range of benefits that migrants bring to their countries, a senior United Nations official said today, urging measures that support this vital segment of the population and which address the discrimination migrants often face.