15 July 2013
United Nations peacekeepers in the Democratic Republic of the Congo (DRC) are on high alert today and stand ready to use force to protect civilians in Goma from an advancing rebellion by the March 23 movement (M23), the top UN official in the country said, urging all parties to exercise restraint.

United Nations peacekeepers in the Democratic Republic of the Congo (DRC) are on high alert today and stand ready to use force to protect civilians in Goma from an advancing rebellion by the March 23 movement (M23), the top UN official in the country said, urging all parties to exercise restraint.

The UN Organization Stabilization Mission in Congo (MONUSCO) expressed “deep concern” about the latest bout of fighting which broke out after a significant group of the M23 attacked the national forces (FARDC) on 14 July in Mutaho, eight kilometres northwest of Goma, in eastern DRC. According to the Mission, heavy artillery and a battle tank were used in the attack.

“Any attempt by the M23 to advance toward Goma will be considered a direct threat to civilians,” the Mission warned. It also noted that the UN blue helmets stand ready to take any necessary measures, including the use of lethal force, in order to protect civilians.

The acting Special Representative of the Secretary General in the country, Moustapha Soumaré, urged restraint to avoid a further escalation of the situation.

“I call on all to abide by the Peace, Security and Cooperation Framework Agreement and to allow the political process towards peace to move forward,” Mr. Soumaré said, referring to the UN-brokered accord adopted in February with the support of 11 nations and four international organizations (11+4), with the aim of ending the cycles of conflict and crisis in the eastern DRC and to build peace in the long-troubled Great Lakes region.

“I urge all signatories of the PSC Framework to exercise their influence in order to avoid an escalation of the situation,” he added.

UN Secretary-General Ban Ki-moon and Mary Robinson, the UN Special Envoy for Africa's Great Lakes Region, along with World Bank President Jim Yong Kim, visited the DRC in May to bolster support for the PSC Framework which Ms. Robinson dubbed a “framework for hope.”

Last month, there was talk of a possible resumption of peace talks between the Government of the DRC and the M23. At that time, Mrs. Robinson had urged both sides to engage in earnest discussion under the auspices of the Chairperson of the International Conference for the Great Lakes Region (ICGLR), Ugandan President Yoweri Museveni. Mr. Robinson was convened in Burundi last week a conference to help develop a road map for women's engagement in efforts to bring peace to Africa's long-trouble Great Lakes countries.

Since March, tensions in the region have been heightened, leading to the Security Council to authorize in March the deployment of an intervention brigade within MONUSCO to carry out targeted offensive operations, with or without FARDC, against armed groups that threaten peace in eastern DRC.

On visit to Republic of Congo, UNESCO chief praises role of music at pan-African festival 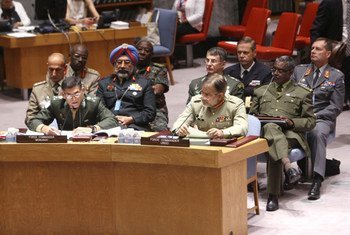 26 June 2013
Military leaders from three United Nations peacekeeping missions in Africa today told the Security Council what they need to support the “blue helmets” under their command and help them better assist local authorities and protect the people of the countries in which they serve.