Shamsuddin Hamedi/UNAMA
Electoral staff in Afghanistan busy laying the groundwork for the polls, which will be critical for the country’s stability.
15 July 2013

The United Nations mission in Afghanistan has welcomed the approval of a law regulating the structure and responsibilities of the country's electoral management bodies, calling it a key step for ensuring credible presidential and provincial council polls next year.

In a news release, the UN Assistance Mission in Afghanistan (UNAMA) urged the rapid presidential endorsement and enactment of the law that was approved by the National Assembly, as well as its speedy implementation, specifically the appointment of the senior officials of the Independent Election Commission (IEC).

“The establishment of the electoral dispute resolution mechanism is also crucial for ensuring transparent, credible and inclusive elections,” the Mission added.

Next year will see Afghanistan hold a presidential election, slated for 5 April, as well as the withdrawal of the majority of allied international military forces, with national forces assuming full responsibility for security throughout the country.

Top UN officials have highlighted the importance of the 2014 polls, stressing the need to ensure that they are free and fair and enjoy wide participation.

UNAMA reiterated its strong support for holding both the presidential and provincial council elections on time and in accordance with the Afghan Constitution.

In that regard, the National Assembly's approval of the law regulating the structure and responsibilities of the electoral management bodies is “a key step toward establishing a robust electoral architecture for the 2014 polls,” it stated.

The Mission added that it looked forward to the Assembly continuing its efforts to finalize the Electoral Law, which defines the legal framework of Afghanistan's electoral processes and ensures the full legal participation of all Afghans.

“UNAMA strongly urges that this is done before the legislature takes its recess,” it stressed. 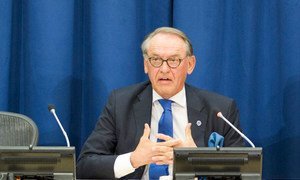 It is vital for Afghanistan, and for its partners, that the country consolidate the important gains made over the past decade and move ahead with its democratic transition, the deputy United Nations chief said today, emphasizing in particular the need for free and fair elections next year.