5 July 2013
The United Nations panel set up to investigate human rights violations in the Democratic People's Republic of Korea (DPRK) began its work this week in Geneva with a number of key meetings as well as discussions on the strategy, methodology and approach to be taken in carrying out its mandate.

The United Nations panel set up to investigate human rights violations in the Democratic People's Republic of Korea (DPRK) began its work this week in Geneva with a number of key meetings as well as discussions on the strategy, methodology and approach to be taken in carrying out its mandate.

The three-member Commission of Inquiry met with, among others, diplomatic missions, UN agencies, scholars and non-governmental organizations, and welcomed the large amount of information that is already being provided by witnesses and experts.

The panel was set up by the UN Human Rights Council in March of this year to look into “systematic, widespread and grave violations of human rights” in the East Asian nation.

“Our key aim is to help provide the DPRK with the means to improve the human rights of its population,” said the Chairperson of the Commission, Michael Kirby. “Our work is guided by respect for the region's proud history, as well as international human rights standards.”

Mr. Kirby, a former Australian judge and previously UN Special Representative on human rights in Cambodia, is working with Marzuki Darusman from Indonesia, who is also the current Special Rapporteur on the situation of human rights in DPRK, and Sonja Biserko, the founder and president of the Helsinki Committee for Human Rights in Serbia.

“We have a clear mandate from the Human Rights Council with the aim of providing hope and prospect to the people of DPRK,” said Mr. Darusman, who along with his co-commissioners briefed reporters in Geneva today following their initial meetings.

Ms. Biserko said the inquiry is designed to “give voice to the suffering” of the people of the DPRK. “We are especially keen to closely look at how the current situation is affecting the lives of women, children and vulnerable groups in the country.”

The commissioners said they had written to DPRK representatives in Geneva to “seek engagement in a spirit of cooperation and transparency” but the response has so far been negative.

The panel, which consists of the three commissioners with a supporting team of nine experienced human rights officials, has already received an “encouraging” amount of information, and will shortly publish a call for submissions.

The team is tasked with probing a variety of alleged violations, including those relating to the right to food, as well as those associated with prison camps, torture, arbitrary detention, discrimination, freedom of expression, the right to life, and freedom of movement. It will also look into enforced disappearances, including the abduction of nationals of other States. 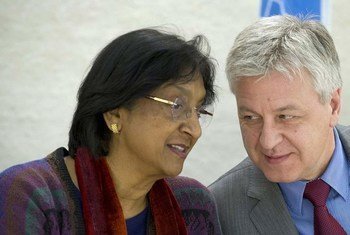 7 May 2013
The President of the United Nations Human Rights Council, Remigiusz A. Henczel, today announced the appointment of the members of the commission of inquiry set up to investigate alleged abuses in the Democratic People's Republic of Korea (DPRK).