UNHCR/S. Malkawi
An eight-year-old Syrian refugee girl stands outside her room in the home of her Lebanese hosts in the Bekaa Valley.

18 June 2013
The United Nations refugee chief today urged greater support for those who have fled the conflict in Syria and for the countries hosting them, as he kicked off a visit to the region in Lebanon, where the pressure on local communities has become “overwhelming.”

“Lebanon is a small country with a big heart,” High Commissioner for Refugees António Guterres told reporters in the capital, Beirut. “There is not a village, city or town in Lebanon that is not hosting Syrian refugees,” he added.

Amid worsening violence, the number of Syrians fleeing to Lebanon is projected to reach well over one million by the end of 2013, the UN refugee agency (UNHCR) said in a news release.

Currently, the UN estimates that some 1.5 million people have fled Syria for Lebanon, Jordan, Turkey, Iraq and Egypt since the fighting between the Government and forces seeking to oust President Bashar Al-Assad began in March 2011. UNHCR estimates that the number could reach almost 3.5 million by the end of this year.

The conflict has also left more than 93,000 people dead and another 6.8 million in need of humanitarian assistance.

Mr. Guterres noted that, from the beginning, the crisis in Syria has posed a threat to regional peace and security. “This threat is now becoming a harsh reality with an increasing risk of spillover of the conflict into neighbouring countries,” he said.

“The international community must overcome its divisions and come together to stop the fighting if we want to prevent the flames of war from spreading across the Middle East.”

He stressed that Lebanon and other neighbouring countries need massive support so that they can continue to receive and help so many refugees and preserve stability.

While in Lebanon, Mr. Guterres and Lebanese Prime Minister Najib Mikati appealed to donors to provide the necessary funding to allow the country to continue assisting Syrian refugees.

Earlier this month, UNHCR updated the amount of funds needed for the Syria Regional Response Plan to almost $3 billion for international agencies and non-governmental organizations (NGOs). An additional $830 million is needed for the Governments of Jordan and Lebanon.

The visit to Lebanon by Mr. Guterres, to be followed by a stop in Jordan, comes ahead of World Refugee Day, commemorated annually on 20 June. This year, UNHCR is marking the Day with the ‘1 family’ campaign, designed to expose the devastating impact of war on families and mobilize public support and solidarity for those affected, including refugees from the Syria crisis.

Also today, Secretary-General Ban Ki-moon welcomed the understandings reached on Syria by leaders of the Group of Eight major economies (G8) in a communiqué issued at their summit in Northern Ireland, including the commitment to bring the Syrian sides to the negotiating table.

A statement issued by his spokesperson said that Mr. Ban stands ready to convene an international conference on Syria as soon as possible to help the Syrian sides reach a comprehensive agreement.

“The announcement of additional contributions of $1.5 billion in humanitarian aid is very welcome and will be critical in saving the lives of Syrians,” the statement added.

Mr. Ban also welcomed the call of the G8 – which consists of the United Kingdom, United States, Germany, France, Italy, Russia, Canada and Japan – for all parties to the conflict to allow access to the UN team tasked with investigating the alleged use of chemical weapons in Syria, noting that the reports submitted to him by Member States, including by Syria, are “serious and warrant full and impartial investigation.” 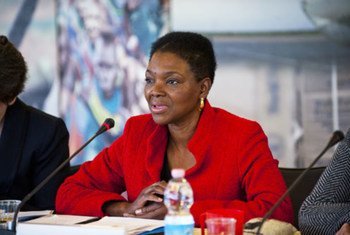 7 June 2013
The United Nations today launched a $4.4 billion humanitarian appeal – the largest aid request in the Organization's history – to assist the growing number of people suffering the effects of the crisis in Syria, which began two years ago with peaceful demonstrations but has since turned into a bloody conflict.