“The reason climate change has risen on the global agenda is because the facts don’t lie. Our world is warming, and our greenhouse gas emissions are a significant cause,” Mr. Ban told members of the National Center for Atmospheric Research in Boulder, Colorado.

“We know this thanks to you – scientists and researchers studying the data and refusing to be swayed by politics, skeptics and interest groups.”

Mr. Ban pointed out that in recent years climate change has risen to the top of the UN’s agenda as an urgent priority that is affecting all countries in increasingly extreme ways, from flooding in Asia to tornadoes in the United States and drought in the Sahel.

“We need people like you, and institutions like this, to analyze the trends, sort the data and produce useful information for forming policy,” Mr. Ban said. “Your work makes my job easier. I am committed to mobilizing political will at the highest levels to address this global challenge.”

Next year, Mr. Ban will convene a high-level meeting of world leaders to mobilize political will for a binding climate change agreement by 2015, and he emphasized that the continuous contribution of the scientific community will be crucial for decision-making in this regard.

“Over the next two years, I will engage leaders at the highest level – from governments, business, finance, science and civil society – and harness the full strength of the UN system to catalyze ambitious action to reduce emissions and strengthen climate resilience,” Mr. Ban said.

He also encouraged scientists to build collaborations that transcend borders and that help build capacity for research and decision-making in developing countries since they are often the most vulnerable to climate change and do not have the ability to generate and apply relevant climate information.

“To successfully reduce the risks posed by climate change, we will need the full engagement of everyone – including the scientists and meteorologists who have their fingers on the pulse of our planet,” Mr. Ban concluded.

“Country after country, leader after leader, is recognizing that we can only tackle our challenges by taking them on together,” Mr. Ban said, stressing the importance of international cooperation. “No nation, no region, no group can do it alone.”

Mr. Ban will also give the commencement speech at the University of Denver, where he will also receive an honorary degree. 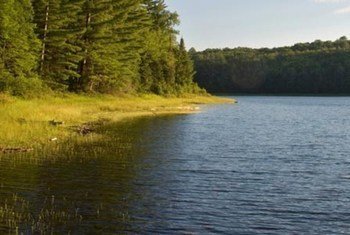 16 May 2013
With dire warnings likely to match or exceed the worst fears about the effects of global warming, environment and development experts gathered today at United Nations Headquarters to debate the twin challenge of curbing climate change while sustaining economic growth.