7 June 2013
Members of the Security Council today expressed their concern at the resurgence of fighting in the Golan Heights and at the prospect of countries withdrawing their troops from the United Nations peacekeeping mission tasked with monitoring the longstanding ceasefire between Israel and Syria.

Two peacekeepers were injured yesterday amid intense fighting in the area of separation monitored by the UN Disengagement Observer Force (UNDOF), which has come under increasing threat and attacks in recent months as fighting between Syrian forces and anti-government groups continues unabated.

Austria – which contributes about one-third of UNDOF's troops – has announced its decision to withdraw its soldiers, reportedly citing a lack of freedom of movement and an unacceptable level of danger to its personnel.

“Everyone agreed that UNDOF should continue in its mission, even if it is temporarily reduced in its ability to fulfil the current mandate,” Ambassador Mark Lyall Grant of the United Kingdom, which holds the rotating presidency of the Council for June, told reporters after closed-door talks on the latest developments.

“Everyone felt that UNDOF played a key role in guaranteeing the 1974 ceasefire disengagement agreement between Israel and Syria and also acting as a conduit of communications, including in the last few days between Israel and Syria,” he added. “It was therefore an important symbol of the stability across the Israel-Syrian border.”

Mr. Lyall Grant said the Department of Peacekeeping Operations (DPKO) is currently looking to engage with countries, particularly existing troop contributors, to see whether they are willing to increase their troops to fill the gap that will be left by the Austrian withdrawal.

DPKO will also be putting forward options to the Council in the next few weeks, in advance of UNDOF's renewal on 26 June, on how the mandate can be strengthened, amended or changed in the light of the current circumstances.

“It is clear that, with the fighting going on in Syria and the prospect of it continuing for some time yet, the current mandate for UNDOF is not able to be properly fulfilled,” Mr. Lyall Grant stated.

Earlier today, the Council strongly condemned the intense fighting in the Golan Heights, including the attack that injured the two UNDOF peacekeepers, and called on all parties to fully cooperate with the mission to enable it to operate freely and to ensure full security of its personnel.

“The members of the Security Council expressed their deep concern at the risk that all military activities in the area of separation conducted by any actor pose to the long-held ceasefire and the local population,” the 15-member body said in a press statement.

It also noted with grave concern that there have been a number of incidents threatening the safety and security of UN personnel in recent months and underscored they would continue to monitor the situation closely. 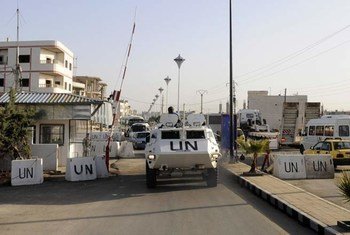 6 June 2013
Secretary-General Ban Ki-moon said today he regrets Austria’s decision to withdraw its troops from the United Nations peacekeeping force in the Golan Heights, which has faced a number of security risks and operational challenges in recent months amid the escalating conflict in Syria.