6 June 2013
Secretary-General Ban Ki-moon said today he regrets Austria’s decision to withdraw its troops from the United Nations peacekeeping force in the Golan Heights, which has faced a number of security risks and operational challenges in recent months amid the escalating conflict in Syria.

Austria is one of three countries – along with India and the Philippines – that contribute military personnel to the UN Disengagement Observer Force (UNDOF), which monitors the 1974 disengagement accord between Syria and Israel after their 1973 war.

“Austria has been a backbone of the mission and their withdrawal will affect the mission’s operational capacity,” UN spokesperson Martin Nesirky told reporters in New York. “We are in discussions with them about the timing of the withdrawal, and with other troop-contributing countries to provide replacement troops.”

Austria reportedly cited a lack of freedom of movement and an unacceptable level of danger to its soldiers in deciding to withdraw. Since last November, UNDOF has had its peacekeepers seized by armed groups, its observation posts attacked and looted, and its freedom of movement curtailed.

Mr. Ban, in a statement issued by his spokesperson, noted Austria’s “longstanding and valuable” contribution to UNDOF, and expressed his gratitude to those countries who are continuing to provide troops and military observers to the mission.

“He calls on all parties to respect UNDOF’s freedom of movement and safety and security.”

Mr. Ban also condemned the attack which injured two UNDOF peacekeepers today. Both are reported to be in stable condition after sustaining minor injuries after mortar rounds impacted in Camp Ziouani. This comes amid intense fighting between anti-Government elements and Syrian forces within the area of separation in the vicinity of Al Qataniyah and Al Qunaytirah.

The Secretary-General underlined that any military activity in the area of separation has the potential to escalate tensions between Israel and Syria and to jeopardize the long-held ceasefire between the two countries.

“The Secretary-General stresses once again that all concerned in the region must abide by international law and relevant Security Council resolutions, and calls on all to work for de-escalation of violence. He urges parties to strictly respect the disengagement agreement, to stop fighting in the area of separation and to refrain from any violation of the disengagement line.”

Mr. Ban also noted that the Syria crisis, which has claimed more than 70,000 lives since fighting between the Government and opposition forces seeking to oust President Bashar Al-Assad began in March 2011, is having an increasingly destabilizing impact beyond its borders.

“The Secretary-General is gravely concerned about the growing regional ramifications of the conflict. He calls on all parties to move swiftly toward a political solution that is the only way to end the violence and the terrible suffering of the Syrian people.” 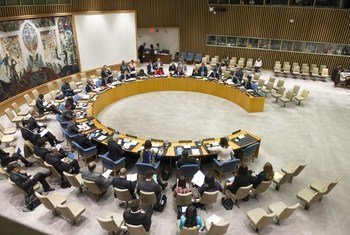 17 May 2013
Members of the Security Council have ‘strongly condemned’ the looting of a UN observation post in the Golan Heights and the temporary detention of three peacekeepers, the third such incident in the past two months.