The United Nations peacekeepers in the Golan Heights have reduced their activities in response to the presence of armed groups from the Syrian conflict, the world body’s peacekeeping chief said today, calling for respect for the safety and security of UN personnel.

Under-Secretary-General for Peacekeeping Operations Hervé Ladsous told journalists in New York that the UN Disengagement Observer Force (UNDOF) has had to “adopt a posture which is somewhat more static” and take additional security measures, which include the use of more armoured vehicles.

“We have had to reduce somewhat the footprint of UNDOF in the Golan Heights in the area of operation,” Mr. Ladsous said after briefing the Security Council behind closed doors on actions taken since the seizure and safe release of 21 blue helmets earlier this month. In the days following, UNDOF vacated two positions which were particularly exposed to gunfire.

He said that clearly, it is a situation that warrants respect for the neutrality, safety and security of UN personnel. “This call applies to all concerned,” he added.

The UN Disengagement Observer Force (UNDOF) monitors the 1974 disengagement accord between Syria and Israel after their 1973 war.

Mr. Ladsous said the incident, more than ever, shows the importance of that agreement for that part of the world “and it has to be upheld.”

He thanked the countries contributing troops to the region and said he very much hopes that they will stay the course on this “very important mission.”

The Department of Peacekeeping Operations (DPKO), which Mr. Ladsous heads, is in the process of looking to replace the contingents which have left in recent weeks, particularly with more Arabic-speaking officers.

Ambassador Vitaly Churkin of Russia, which holds the presidency of the Council for this month, told reporters that the armed groups are being “provocative” in the area where the peacekeepers operate, but the blue helmets do not have the mandated authority from the Council to stop them. 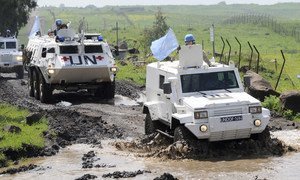 The head of United Nations peacekeeping operations said today that the blue helmets seized in the Golan Heights two days ago are all safe but remain detained, adding that the world body is working to secure their release as quickly as possible.