5 June 2013
Deeply frustrated and disappointed by the Security Council’s failure to take any action against those responsible for war crimes in Darfur, the Chief Prosecutor of the International Criminal Court (ICC) stressed that the plight of the victims has meanwhile “gone from bad to worse.”

“We have done our part and it is up to this Council to live up to the legitimate expectations of Darfur’s victims, namely that individuals alleged to be responsible for their daily sufferings are brought to justice,” Fatou Bensouda told the 15-member body during a briefing this morning.

“These individuals are few among a population of millions who continue to endure untold daily suffering,” she declared, imploring Council members “to act with courage and conviction by adopting appropriate measures within its mandate to ensure that Sudan fugitives are brought to justice sooner rather than later.”

In 2005, the Security Council asked the Hague-based Court to investigate war crimes in Darfur after a UN inquiry found serious violations of international human rights law.

In March 2009, ICC judges issued arrest warrants against, among other top officials, Sudanese President, Omar Al-Bashir, for genocide, crimes against humanity and war crimes committed in Darfur. Mr. Bashir, along with the other ICC indictees in the country, has yet to be arrested.

Ms. Bensouda told the Council today that she was deeply concerned by the worsening situation in the region, as 300,000 people have been displaced in the first five months of this year alone, which exceeds the amount of displaced individuals in the last two years.

There have also been reports that indictees Ali Muhammad Ali Abd-Al-Rahman, also known as Ali Kushayb, Ahmad Harun and Abdel Raheem Hussein – all Government officials – have been involved in crimes against civilians this year, with Mr. Kushayb, leading an attack on the town of Aby Jeradil in April which left more than 100 civilians dead and displaced 30,000 people into Chad.

“Observers have suggested that the Government of the Sudan wanted to appease members of the Misseriya and Ta'isha tribes who participated in the Janjaweed/militia by helping them to seize the land of Salamat, considered by some to be Chadian nationals, and forcibly displacing them in the process,” she said, noting that her Office had been informed of many such incidents in that past.

“This is part of an ongoing pattern,” she declared.

“These alleged crimes are of concern to the international community and require urgent and concerted action. Again, this is a question of potential individual criminal responsibility, not of group or organizational responsibility,” Ms. Bensouda said.

“Regrettably, each briefing has been followed by inaction and paralysis within the Council, while the plight of victims of crimes committed in Darfur has gone from bad to worse,” she said, adding that the use of sexual violence as a weapon of war, hindering humanitarian access, and ongoing impunity have continued, causing despair among the population.

These few individuals must be prosecuted, Ms. Bensouda stressed, and noted that “as long as they enjoy impunity for the crimes they commit, they will continue to represent a threat to international peace and security.”

She noted that while there have been reports of prosecutions of rebels under Sudan’s anti-terrorism act, there have been no prosecutions of systematic crimes committed by Government forces. Working with regional actors such as the League of Arab States and the African Union (AU) could help address this challenge, and Ms. Bensouda called on the AU to implement the recommendations of its High-Level Panel on Darfur.

Although Sudan is not a State Party to the Rome Statute which established the ICC, it is obliged to cooperate with and provide any necessary assistance to the Court and the Prosecutor in accordance with a Council resolution adopted in 2005.

“We stand ready to continue doing our part, but time is long past due for this Council to act with courage and conviction by adopting appropriate measures within its mandate to ensure that Sudan fugitives are brought to justice sooner rather than later,” she concluded. 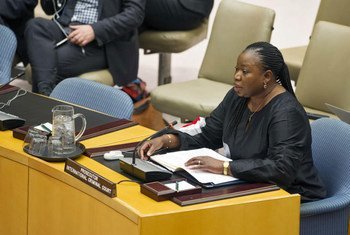 13 December 2012
Crimes are still being committed against civilians in Sudan’s Darfur region, the Chief Prosecutor of the International Criminal Court (ICC) told the United Nations Security Council today, while noting a continued lack of progress towards arresting those already indicted for alleged atrocities.