23 May 2013
Civilians in Sudan are paying the biggest price in the war between the Government and rebels, the United Nations humanitarian chief reiterated today as she wrapped up a visit to the country urging more sustainable support for displaced populations, many of whom have been living in camps for a decade.

“Whether it is Darfur, South Kordofan or Blue Nile, what is needed above all else is for the fighting to stop and for the conflicts to be resolved by peaceful means,” Under-Secretary-General for Humanitarian Affairs Valerie Amos told journalists in Khartoum.

Expanding on the goals of her visit, Ms. Amos said she wanted a first-hand look at humanitarian operations in the country, and “second – given the sometimes difficult relations between the Government of Sudan and the United Nations on humanitarian issues – to work to build trust and confidence so that we are in a stronger position to help meet the humanitarian needs of people in Sudan.”

During the four-day visit, Ms. Amos saw up-close the humanitarian situation in Darfur which received an influx of some 300,000 people so far this year, according to UN estimates, a figure higher the total number of people displaced in the last two years together.

The situation is “extremely worrying,” Ms. Amos said, adding “it is clear that humanitarian aid agencies are struggling to cope” to assist the 1.4 million people still living in camps without adequate access to basic health-care, education and other services.

She also said she was “shocked” to see new arrivals to the camps sheltering under small pieces of tarpaulin in the hot desert sun.

Valerie Amos, United Nations Humanitarian Chief, visited Zam Zam camp in Darfur on 22 May. After a decade of conflict, some 1.4 million people are living in camps in Darfur. Photo: UNAMID/Albert González Farran

A woman at a new settlement on the fringes of Zam Zam. In recent weeks hundreds of people have arrived in Zam Zam having fled new clashes in East Darfur. Photo: UNAMID/Albert González Farran

Aziza Abdagabar Mohamed and her child, born four days ago in Zam Zam. Humanitarian agencies told Ms Amos that their ability to help people is shrinking, partly because of a lack of funding. Photo: UNAMID/Albert González Farran

Ms. Amos talks with a woman in Zam Zam camp in North Darfur. Amos expressed her frustration at the international community's failure to help people in the region return to their normal lives. Photo: UNAMID/Albert González Farran

"We need to build stronger bridges between humanitarian and development work," Ms Amos said. "It is disappointing that after 10 years we have not been able to help people become self-sufficient." Photo: UNAMID/Albert González Farran

People told Ms. Amos of waiting for two weeks after arriving at the camp before they received assistance. In the meantime they survived on what they managed to bring with them. Photo: UNAMID/Albert González Farran

A group of children welcome Ms. Amos to Zam Zam. She met community leaders to discuss the impact of the new arrivals on the limited resources available. Photo: UNAMID/Albert González Farran

Ms. Amos and Darfur Regional Authority's, Tijani Sese hold a press conference at the end of her visit. She emphasized that all parties must place the needs of vulnerable people first. Photo: UNAMID/Albert González Farran

“We cannot let Darfur slip off the radar screen of the international community,” she stressed.

While in Zam Zam camp outside El Fasher, Ms. Amos said she had spoken with a woman who said “she feels like a bird in a cage” and highlighted the hundreds of thousands of children born in the internally displaced persons (IDP) camps.

They “have never known life outside these camps. We cannot forget these children. They are the future of Darfur and of Sudan,” Ms. Amos urged.

Despite efforts, the camps lack adequate basic services, the UN official noted, including schools and necessary education materials for children.

“After ten years of major humanitarian operations in Darfur, we need to find more sustainable ways of supporting displaced people who have no other option but to remain in the camps. We need to build stronger bridges between humanitarian and development work,” Ms. Amos stressed.

In April, the Darfur Donors Conference in Doha raised $3.6 billion in pledges for Darfur, including a commitment of $2.6 billion from the Government of Sudan.

In her statement, Ms. Amos welcomed the commitments but stressed that Sudan has a “serious funding crisis.” An estimated $7.2 billion is needed for a UN-backed six-year effort to move Darfur away from food handouts and other emergency aid, laying the foundation for lasting development through improved infrastructure.

Ahead of a planned polio vaccination campaign, Ms. Amos reminded the Government and the Sudan Peoples Liberation Movement-North (SPLM-North) that the UN has called on both sides to agree to a halt in fighting for one week to allow health officials and volunteers to inoculate the estimated 150,000 children under five years of age.

The Government and SPLM-North began direct talks last month under the auspices of the African Union High-Level Implementation Panel in Addis Ababa.

“I hope the talks will resume soon and that they will lead to a resolution of the conflict so that people can return to their homes and start to rebuild their lives,” Ms. Amos said.

The insecurity and movement restrictions imposed by the Government cut off South Kordofan and Blue Nile states until earlier this month, when the UN World Food Programme (WFP) said it was finally able to provide the first food rations in nearly two years to families there.

Ms. Amos added that while there was some improved access to the region, she was worried about the safety and well-being of civilians in the war-affected areas that are not under Government control.

During her visit, Ms. Amos said she had some “very constructive and informative meetings” with President Omar Al-Bashir, other senior Government officials in Khartoum and Darfur, as well as with UN Member States, UN agencies, NGOs and other humanitarian partners. 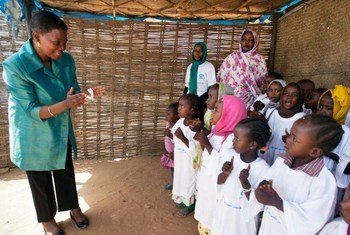 22 May 2013
The United Nations humanitarian chief today stressed the international community must do more to ensure the people of Sudan's Darfur region can better provide for themselves.