IRIN/Manon Riviere
Two women in Mauritania who had operations for obstetric fistula.

23 May 2013
The prevalence of obstetric fistula – a preventable and treatable condition linked to women’s reproduction – among women and girls in developing countries is a denial of their human rights, senior United Nations officials today said urging global action to make childbirth safer.

“The persistence of fistula is a result of human rights denied and a reflection of human rights abuse,” Babatunde Osotimehin, Executive Director of the UN Population Fund (UNFPA), said in his message marking the first-ever International Day to End Obstetric Fistula.

“It reflects chronic health inequities and health-care system constraints, as well as wider challenges, such as gender and socio-economic inequality, child marriage and early child bearing, all of which can undermine the lives of women and girls and interfere with their enjoyment of their basic human rights.”

An estimated three million women and girls, nearly all in developing countries, are affected with another 50,000 to 100,000 new cases developing each year, according to figures cited by UNFPA and the UN World Health Organization (WHO).

An obstetric fistula is a hole in the birth canal caused by the baby’s head pushing against the mother’s pelvic bone during contractions, often without adequate medical care during prolonged labour. The hole forms between a woman’s vagina and her bladder or rectum, causing her to leak bodily fluids.

The newborn rarely survives, if it is born live, and renders the woman incapable of having more children. Shunned by their families and communities, women with fistula are often poor and marginalized.

According to UNFPA, women and girls with obstetric fistula are usually poor, often illiterate, with limited access to health services, including maternal and reproductive health care.

“In an age of rapid globalization in which mobile and e-technologies have changed the face of human communications and revolutionized the frontiers of science and medicine, it is unconscionable that the poorest, most vulnerable women and girls continue to suffer needlessly from this scourge,” Mr. Osotimehin said.

Reconstructive surgery to fix the condition cost around $400 according to the global Campaign to End Fistula, which UNFPA leads and coordinates with a wide range of partners. The campaign is based on three key strategies of prevention, treatment and social integration.

Over the past decade, the agency provided support to more than 50 countries, resulting in fistula treatment and care for some 34,000 women and the training of thousands of health-care personnel in prevention and management.

“We are training more health workers close to where people live so that they don’t have to travel long distances before they get the service,” Mr. Osotimehin told UN Radio. “We don’t have to have a midwife that is super-qualified. You can actually train a cadre of staff over a short period of time to be able to deliver good quality service under supervision.”

Where prevention is not possible, treatment is more often an option. In Mozambique, 16-year-old Essita Mulhanga underwent surgery to repair her fistula.

“I had to deliver at home. My husband was not at home to help me. After delivering, this problem of being incapable to control my urine started,” Ms. Mulhanga told UNFPA in a clinic in the town of Espungabera before undergoing the surgery this past March.

He called for at least $750 million to treat all cases of obstetric fistula by 2015, the deadline for the eight anti-poverty targets known as the Millennium Development Goals (MDGs) towards which the UN is boosting efforts in its “1,000 days of action” campaign.

“This is part of our broader effort to reach the Millennium Development Goals and mobilize partners in the Every Woman, Every Child initiative,” Mr. Ban said today in his message on the Day.

“The benefits reverberate far beyond the women who are directly affected, extending to children who will be raised by healthy mothers and communities that benefit from their contributions.”

In his report, Mr. Ban noted three interventions that have the most important and immediate impact on maternal death and disability: family planning; attendance during childbirth by skilled health personnel, such as a midwife; and emergency obstetric care, in particular Caesarean sections.

Early marriage is also an issue with adolescent girls particularly at risk for obstetric fistula at a much higher rate than women in their twenties.

Highlighting the importance of the International Day to End Obstetric Fistula to raise awareness of the condition, Mr. Ban said: “The more understanding and action we generate today, the more we can look forward to a future where obstetric fistula is virtually unknown because it is virtually non-existent.” 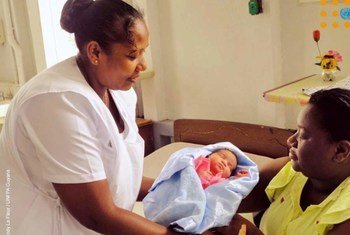 6 May 2013
Midwives can make the difference between life and death for hundreds of thousands of women every year, the United Nations population agency affirmed today, recognizing their crucial role in improving maternal health, family planning and assisting during humanitarian emergencies.