22 May 2013
In the first visit of its kind, Secretary-General Ban Ki-moon and World Bank President Jim Yong Kim are in the Democratic Republic of the Congo (DRC) to support a recent peace deal and promote economic development in the long-troubled region.

“This is a critical moment for the Democratic Republic of the Congo and the Great Lakes region,” Mr. Ban told reporters in the capital, Kinshasa, following a meeting with President Joseph Kabila.

The “unprecedented” joint visit is in support of the UN-brokered peace agreement, which was signed in February by 11 African leaders and aims to end the cycles of conflict and crisis in the eastern DRC and to build peace in the wider region.

“We believe it offers the best hope for peace in a generation,” Mr. Ban said. “But that agreement must translate into concrete actions. A peace deal must deliver a peace dividend for people.

“We made extraordinary efforts to secure an additional $1 billion in funding because we believe this can be a major contributor to a lasting peace in the Great Lakes region,” Mr. Kim said.

UN Secretary-General Ban Ki-moon on his official visit to the Democratic Republic of the Congo with the World Bank Group President. Photo MONUSCO/John Bompengo

“This funding will help revitalize economic development, create jobs, and improve the lives of people who have suffered for far too long. Now the leaders of the Great Lakes region, by restarting economic activity and improving livelihoods in border areas, can boost confidence, build economies, and give new opportunities for millions of people.”

In addition to meeting with President Kabila and other Government officials, Mr. Ban and Mr. Kim will also meet parliamentarians and representatives of civil society. As part of their visit, both men will travel tomorrow to the eastern city of Goma.

Recent days have witnessed renewed clashes between rebels from the 23 March Movement (M23) and the DRC national armed forces (FARDC) in Goma, which was the scene of intense fighting late last year.

In March, the UN deployed an intervention brigade within the existing peacekeeping mission (MONUSCO) to bring added stability and protect civilians in eastern DRC. The brigade is authorized to carry out targeted offensive operations, with or without the Congolese national army, against armed groups that threaten peace in that part of the country.

Mr. Ban and Mr. Kim are joined on the visit by Mary Robinson, the Secretary-General’s Special Envoy to the Great Lakes Region, who yesterday met with Congolese civil society representatives in Kinshasa to exchange views on the recent peace agreement – known formally as the Peace, Security and Cooperation Framework for the Democratic Republic of Congo and the Region.

The representatives voiced concerns about whether the agreement will actually be carried out, to which Mrs. Robinson replied that it will only be respected if everyone plays his or her part, and that includes the 11 signatories, as well as the DRC national authorities and civil society.

“The focus of my concern for this Framework is that it works for the Congolese people,” she stated. “As Special Envoy, I will hold every person to account. I want you, civil society, to hold your Government to account.” 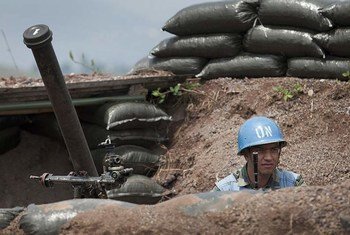 20 May 2013
The United Nations peacekeeping mission in the Democratic Republic of the Congo (DRC) today voiced its concern about renewed clashes between rebels from the 23 March Movement (M23) and the national armed forces in the eastern city of Goma.