20 May 2013
The United Nations peacekeeping mission in the Democratic Republic of the Congo (DRC) today voiced its concern about renewed clashes between rebels from the 23 March Movement (M23) and the national armed forces in the eastern city of Goma.

Fighting broke out early this morning in Kibati and Rusayo, some 12 kilometres from Goma, the capital of North Kivu province, according to the UN Organization Stabilization Mission in DRC (MONUSCO).

MONUSCO added that, according to reports, the Congolese national armed forces (FARDC) used attack helicopters in one of their operations.

“MONUSCO has expressed its concerns about this incident and the mission is actively pursuing a diplomatic and political solution to contain and end the clashes,” said Mr. del Buey.

Last November the M23 – made up of former members of the FARDC who mutinied in April 2012 – occupied Goma. Clashes between the Government and rebels displaced more than 130,000 people in and around the city and sent another 47,000 fleeing to neighbouring South Kivu province. Amidst widespread condemnation and calls for their withdrawal, the M23 fighters pulled out after 11 days.

In the wake of those events, the Security Council in March authorized the deployment of an intervention brigade within MONUSCO to carry out targeted offensive operations, with or without the Congolese national army, against armed groups that threaten peace in eastern DRC. A contingent of Tanzanian soldiers arrived Goma earlier this month as part of the brigade.

The latest clashes come just weeks after the UN Envoy for Africa’s Great Lakes Region, Mary Robinson, reported that there are encouraging signs that the new push for peace in the DRC can succeed.

“There is a fresh chance to do more than just attend to the consequences of conflict, or to manage crises of the kind seen again most recently last November. There is a chance to resolve its underlying causes and to stop it for good,” she told a closed door session of the Security Council earlier this month via video teleconference.

Mrs. Robinson cautioned that success was not guaranteed, “we can be sure that if it fails, the consequences will be grave.” The briefing followed a week-long visit to the region to follow up on the UN-brokered Peace, Security and Cooperation Framework for the Democratic Republic of the Congo and the Region, or as she describes it, a “framework for hope.”

The Framework, adopted in February with the support of 11 nations and four international organizations (11+4), aims to end the cycles of conflict and crisis in the eastern DRC and to build peace in the long-troubled region. 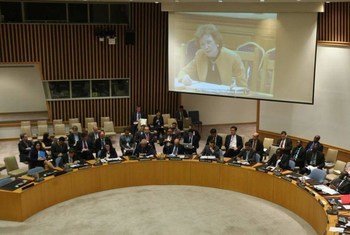 6 May 2013
There are encouraging signs that the new push for peace in the Democratic Republic of the Congo (DRC) can succeed, Mary Robinson said today in her first briefing to the Security Council since taking her post as United Nations Envoy for Africa’s Great Lakes Region.