8 May 2013
Secretary-General Ban Ki-moon and the Joint Special Representative of the United Nations and the Arab League for Syria, Lakhdar Brahimi, today welcomed the statements by Russia and the United States that they would work together to achieve a political solution to end a conflict that has claimed more than 70,000 lives over the past two years.

On Tuesday, the US and Russia reportedly agreed to convene an international conference to find a political solution to the Syria crisis, adding that they would encourage both Damascus and the opposition to negotiate. The announcement came after talks in Moscow between US Secretary of State John Kerry and Russian Foreign Minister Sergei Lavrov.

“The statements made in Moscow constitute a very significant first step forward. It is nevertheless only a first step,” Mr. Brahimi said in a statement, adding that this is the first “hopeful news” concerning Syria in a very long time.

A statement issued by Mr. Ban’s spokesperson noted that the Secretary-General and Mr. Brahimi have asserted from the outset their conviction that a negotiated political solution is the only way to end this “prolonged and ever-deepening” crisis.

“The goal should be clear to all – it must be an end to violence, a clean break from the past and a transition to a new Syria in which the rights of all communities are protected and the legitimate aspirations of all the people in Syria for freedom, dignity and justice are met,” the statement said.

Mr. Brahimi, who is currently attending a meeting of The Elders in Ireland, has called on the US and Russia to exercise leadership and work together to initiate a process to implement the Geneva Declaration of 30 June 2012.

That document – issued after a meeting in the Swiss city of the Action Group for Syria – lays out key steps in a process to end the violence. Among other items, it calls for the establishment of a transitional governing body, with full executive powers and made up by members of the present Government and the opposition and other groups, as part of agreed principles and guidelines for a Syrian-led political transition.

“Naturally the Syrians themselves – all the Syrians – will occupy pride of place in the process that should be launched as early as possible. It is equally important that the entire region mobilises in the support of the process,” he added.

In addition to the tens of thousands killed, some 4.25 million people have been displaced since the uprising against President Bashar al-Assad began in March 2011, with more than 1.4 million of them taking refuge in neighbouring countries.

The UN estimates that some 6.8 million people inside Syria are in urgent need of humanitarian assistance – nearly half of them children. 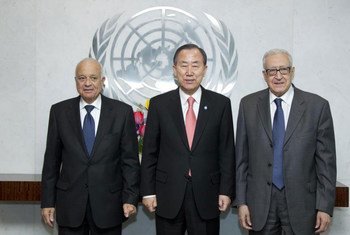 22 April 2013
Secretary-General Ban Ki-moon and the Secretary-General of the League of Arab States, Nabil Elaraby, today met with their special representative Lakhdar Brahimi to discuss ways to help the Syrian parties begin a political process which could help end the violence while protecting all people and communities in the shattered country.