Secretary-General Ban Ki-moon has met with Togo President Faure Essozimna Gnassingbé to discuss recent developments in Africa, the importance of promoting sustainable peace and security in West Africa and the creation of a UN peacekeeping mission in Mali to which Togo has contributed.

During the meeting on 13 May at the UN Headquarters in New York, the Secretary-General expressed his gratitude for Togo’s contribution to peacekeeping in Mali and Guinea-Bissau.

In April, the UN Security Council approved a 12,600-strong UN peacekeeping operation known as the UN Multidimensional Integrated Stabilization Mission in Mali (MINUSMA) to take over from the African-led mission in Mali on 1 July and authorized the blue helmets “to use all necessary means” to carry out security-related stabilization tasks, protect civilians, UN staff and cultural artefacts, and create the conditions for the provision of humanitarian aid.

MINUSMA’s core task is to support the political process in Mali, in close coordination with the African Union and the Economic Community of West African States (ECOWAS), of which Togo is a member.

Togo peacekeepers are also active in Guinea-Bissau, a West African country with a history of coups, misrule and political instability since it gained independence from Portugal in 1974.

Soldiers seized power in the country in April 2012 in a coup d’etat ahead of a presidential run-off election that was slated for 22 April between Carlos Gomes Júnior and a former President, Kumba Yala, prompting calls from the international community for a return to civilian rule.

In recent months, the UN has been working with the African Union and other partners to see how to assist Guinea-Bissau in fast-tracking the process of transition into elections which could be held by November.

The rotating presidency of the 15-member Security Council is held this month by Togo.

In addition, the two leaders agreed on the importance of adopting the Global Climate Change Treaty before the end of 2015. Representatives of Governments will meet for two-weeks starting on 3 June in Bonn, Germany, for the next round of climate change talks under the umbrella of the UN Framework Convention on Climate Change (UNFCCC).

♦ Receive daily updates directly in your inbox - Subscribe here to a topic.
♦ Download the UN News app for your iOS or Android devices.
togo 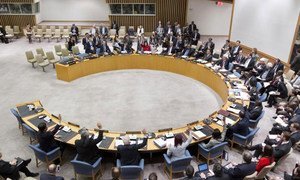 The Security Council today approved a 12,600-strong United Nations peacekeeping operation to take over from the African-led mission in Mali on 1 July and authorized the blue helmets “to use all necessary means” to carry out security-related stabilization tasks, protect civilians, UN staff and cultural artefacts, and create the conditions for the provision of humanitarian aid.