UN Photo/JC McIlwaine
Security Council voting to approve a 12,600-strong UN peacekeeping operation to take over from the African-led mission in Mali on 1 July 2013.

25 April 2013
The Security Council today approved a 12,600-strong United Nations peacekeeping operation to take over from the African-led mission in Mali on 1 July and authorized the blue helmets “to use all necessary means” to carry out security-related stabilization tasks, protect civilians, UN staff and cultural artefacts, and create the conditions for the provision of humanitarian aid.

MINUSMA’s core task is to support the political process in Mali, in close coordination with the African Union and the Economic Community of West African States (ECOWAS).

“The mission will help the Malian authorities to implement the transitional roadmap towards the full restoration of constitutional order, democratic governance and national unity,” said Mr. Ladsous. “This includes the holding of elections in July, confidence building and facilitation of reconciliation at the national and local levels.”

While officially established today, MINUSMA troops will not be on the ground until 1 July, when they will take over from the African-led force (AFISMA) and begin an initial 12-month mandate. That start date is subject to review and could be delayed in the event of a major international military operation or a continued threat from terrorist forces on the civilian population or international personnel, according to the resolution.

However, as of today, MINUSMA will assume responsibility for the mandated tasks being carried out by the UN Office in Mali (UNOM), which deployed in January and provides good offices aimed at facilitating contacts between the Government and those groups that wish to take part in the search for a political solution to the crisis.

In the resolution, the Security Council called on Member States to provide troops and police with “adequate capabilities and equipment in order to enhance the capacity of MINUSMA to operate, and discharge its responsibilities effectively.” Mr. Ladsous said meetings are planned with potential troop-contributing countries over the next few days.

“Human rights is one of the core elements of the mandate. We will do some vetting of the personnel and we will increase their training in human rights and international humanitarian law,” Mr. Ladsous said. “We want our people to be impeccable.”

The Council also authorized Secretary-General Ban Ki-moon to approve inter-mission cooperation between MINUSMA and the UN Missions in Liberia (UNMIL) and Cote d’Ivoire (UNOCI) for temporary sharing of troops, assets, and logistic and administrative support without endangering the operational capabilities of those missions and also to maximize the effectiveness and efficiency of the missions in West Africa.

It also requested Mr. Ban to appoint expeditiously a Special Representative for Mali who would also head MINUSMA. This envoy would also be responsible for coordinating the activities of the UN agencies, funds and programmes in Mali, as well as use his or her good offices and coordinate the activities of the international community in support of the mission’s mandate.

Mr. Ladsous did not offer hints about who might head MINUSMA, but said that an appointment “is being worked upon.”

Acting under Chapter VII of the UN Charter, the Council authorized the UN’s newest peacekeeping mission to “use all necessary force” to “stabilize the key population centres, especially in the north of Mali… to deter threats and take active steps to prevent the return of armed elements to those areas,” as well as to support the transitional authorities to extend and re-establish State administration throughout the country.

In parallel to MINUSMA, the Council authorized French troops “within the limits of their capacities and areas of deployment, to use all necessary means” to intervene in support of the mission when under imminent and serious threat, upon Mr. Ban’s request.

France’s Ambassador to the UN, Gerard Araud, today stated that his Government expects to keep 1,000 troops inside Mali until the end of the year.

While the protection of civilians is a key component of the mission’s mandate, the Council reminded the transitional authorities in Mali that the primary responsibility to protect civilians rests with them. They also noted that while UN peacekeepers have the authority to use force in certain cases, the Malian Defence and Security Force will continue to assume full responsibility for providing security throughout the country.

The Council also authorized the use of force to assist the transitional authorities in protecting from attack the cultural and historical sites, in coordination with the UN Educational, Scientific and Cultural Organization (UNESCO).

It also reiterated its call on all parties within Mali and on all Member States, particularly those in the area, “to cooperate fully with the deployment and activities of MINSUMA” and “to ensure the free, unhindered, and expeditious movement to and from Mali.”

In a meeting today in New York, Secretary-General Ban Ki-moon and the Foreign Minister of Mali, Tiéman Coulibaly, exchanged views on the implementation of resolution 2100, as well as the political, human rights and security situation in the country.

Mr. Ban reiterated the UN’s commitment to work closely with the Malian authorities to support inclusive political dialogue, protect and promote human rights, and ensure the protection of the civilian population, according to a readout provided by his spokesperson. 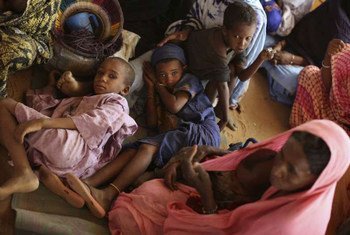 19 April 2013
The top United Nations political official today reiterated the importance of the political process in Mali at a high-level meeting with senior UN and Government officials, while UN aid agencies urged more funding to assist the hundreds of thousands of Malians driven from their homes.