IRIN/Heba Aly
Al-Rustumiya, an informal settlement for displaced people on the outskirts of the Iraqi capital Baghdad.

2 May 2013
More people were killed and wounded in violent attacks across Iraq in April than in any month since June 2008, the United Nations mission in the country said today.

According to figures released by the UN Assistance Mission for Iraq (UNAMI), a total of 712 people were killed and 1,633 were wounded in acts of terrorism and violence.

The majority of victims were civilians, with 595 people killed and 1,438 injured. A further 117 members of the Iraqi Security Forces were killed and 195 were injured.

Baghdad was the worst affected governorate, with a total of 697 civilian casualties, followed by Diyala, Salahuddin, Kirkuk, Ninewa and Anbar.

The Special Representative of the Secretary-General in Iraq, Martin Kobler, has repeatedly called on Iraqi authorities to take decisive measures to stop the escalating violence, and on Tuesday, Secretary-General Ban Ki-moon urged all Iraqis to come together and engage in inclusive dialogue to overcome the “deep political crisis” facing the country.

“It is only through dialogue and full participation in the government institutions that bold initiatives can be taken to overcome the critical phase the country is going through,” Mr. Kobler said. 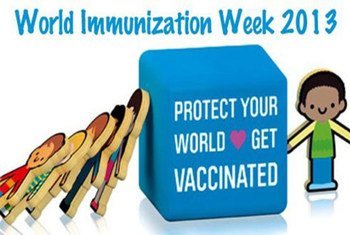 25 April 2013
Polio eradication efforts are the focus of the United Nations-backed Global Vaccine Summit which also aims to protect millions of children from diseases like measles and tetanus through inoculations.