The United Nations today launched the Zero Hunger Challenge in Asia and the Pacific, calling on governments, farmers, scientists, business, civil society and consumers to work together to end hunger in the region where the majority of the world’s undernourished people live.

The United Nations today launched the Zero Hunger Challenge in Asia and the Pacific, calling on governments, farmers, scientists, business, civil society and consumers to work together to end hunger in the region where the majority of the world’s undernourished people live.

“Sustainable development and inclusive growth will not happen on empty stomachs,” said Noeleen Heyzer, Executive Secretary of the UN Economic and Social Commission for Asia and the Pacific (ESCAP).

“It is unacceptable that in the 21st century, with all of our technological and agricultural expertise, more than 870 million people globally wake up hungry every morning, try to find the energy to make a living for their families through the day, and then still go to bed hungry at night,” she added.

First proposed at the UN Conference on Sustainable Development (Rio+20) in Brazil last June, Secretary-General Ban Ki-moon’s Zero Hunger Challenge aims for a future where every individual has adequate nutrition.

Its five objectives are to make sure that everyone in the world has access to enough nutritious food all year long; to end childhood stunting; to build sustainable food systems; to double the productivity and income of smallholder farmers, especially women; and to prevent food from being lost or wasted.

According to the UN Food and Agriculture Organization (FAO), one in every eight people in Asia and the Pacific suffers from chronic hunger, and nearly two-thirds of the world’s chronically hungry people live in the region.

“We cannot rest while so many people go hungry in a world where there is enough food for all,” Deputy Secretary-General Jan Eliasson said at the regional launch of the campaign, which took place as ESCAP kicked off its 69th session in Bangkok.

Halving the proportion of people who suffer from hunger is one of the eight anti-poverty targets known as the Millennium Development Goals (MDGs) that world leaders have pledged to achieve by 2015, along with improving education, gender equality, child and maternal health and environmental stability.

“The MDGs have been the most successful global anti-poverty drive in history. But there are still many gaps,” Mr. Eliasson said in his remarks to the session, noting, among other things, that one billion people worldwide do not have enough to eat.

“With less than 1,000 days until the end of 2015, the agreed deadline for achieving the Millennium Development Goals, I urge you to seize the opportunity of this Commission session to scale-up action to accelerate our efforts, be they national, regional or global.”

He added that the range of issues before the Commission is both “exciting and challenging” – from charting new development paths to building resilience to natural disasters, and from promoting social protection to accelerating economic integration and South-South trade.

“These are the key issues which will shape the region’s promising future, strengthen its human and natural capital and ensure its central role, not only in the global economy, but also in forging a better, more sustainable world for all.”

The theme of the Commission’s current session, which concludes on 1 May, is “Building resilience to natural disasters and major crises,” with discussions focusing on the many challenges to inclusive, sustainable and resilient growth in the region, particularly economic shocks and increasingly severe and frequent natural disasters. 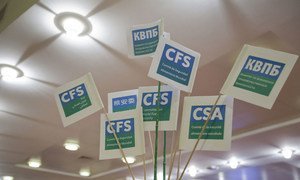 Nutrition and food security should be the top development goal as the international community sets its priorities beyond 2015, the target date for a achieving the globally agreed anti-poverty targets known as the Millennium Development Goals (MDGs), senior United Nations officials have stressed.