Secretary-General Ban Ki-moon has asked the head of the United Nations probe of the alleged use of chemical weapons in Syria to come to New York on Monday for consultations, a spokesperson for the world body said today.

Swedish scientist Åke Sellström was appointed by Mr. Ban one month ago to head the fact-finding mission, which was launched following a formal request from the Syrian Government.

The initial focus of the investigation will be an incident involving the alleged use of chemical weapons in Kfar Dael region in Khan Al-Asal area in Aleppo governorate.

The fact-finding team is on stand-by and ready to deploy within 24 to 48 hours. Mr. Ban has consistently urged the Syrian authorities to provide full and unfettered access to the mission.

“We remain in close contact with the Syrian authorities, most recently through another letter from Angela Kane, the High Representative for Disarmament Affairs, yesterday urging the Syrian Government to grant unconditional and unfettered access to the mission,” UN spokesperson Martin Nesirky told reporters at UN Headquarters in New York.

“The Secretary-General strongly urges the Syrian Government to respond swiftly and favourably so that this mission can carry out its work in Syria.”

Meanwhile, Mr. Ban has taken note of the letter from the White House to the United States Congress which reportedly states that the US believes “with some degree of varying confidence” that the Syrian Government has used chemical weapons – specifically the nerve agent sarin – against its own people.

While the Secretary-General takes the assessment presented in the letter seriously, the UN is not in a position to comment on assessments based on national intelligence information, his spokesperson stated. 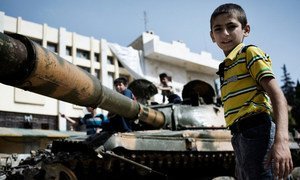 Noting the Syrian Government’s reported rejection of his proposals on arrangements for a United Nations probe of the alleged use of chemical weapons in Syria, Secretary-General Ban Ki-moon today appealed the authorities to extend their fullest cooperation and allow the investigation to proceed.