26 April 2013
The refugee crisis sparked by the conflict in Syria is increasingly straining health services in surrounding countries, while refugees are finding it harder to access the quality treatment they need, the United Nations refugee agency warns in report released today.

The report, which covers the first three months of 2013 in Iraq, Jordan and Lebanon, shows that more than 1 million refugees need treatment for a wide range of both common and conflict-related conditions, Adrian Edwards, spokesman for the UN High Commissioner for Refugees (UNHCR) told journalists in Geneva.

Mr. Edwards explained that the situation is particularly challenging for those with chronic and other costly health conditions, such as diabetes, hypertension and cardiovascular illnesses, as well as expensive referral care more commonly diagnosed and treated in middle-income countries. The report was primarily based on information from established refugee camps, except for data from Lebanon.

He said that as of last night, 1,401,435 Syrians had registered as refugees in the region or were pending registration. This corresponds to 30 per cent more than the total envisaged under the current Regional Refugee Response Plan by end June 2013 – for which around 55 per cent of funding has so far been received.

“An updated plan is due to be presented to donors in late May. UNHCR continues to roll out additional capacity as funding comes in,” he added.

With nearly 2.5 million Syrian refugees throughout the entire region, the report cites two major problems facing the health system. First, with low funding for the refugee crisis, the challenge of providing access to quality health care for Syrian refugees is growing – particularly for people living outside of camps.

Secondly, the increasing numbers of people needing medical help is straining existing health services in each of the affected countries.

“Both issues are a matter of serious concern to UNHCR,” Mr. Edwards stressed, adding: “We continue, with our partners, to provide medical care for refugees in the camps in Jordan and Iraq. But for those refugees who live outside of camps, often in urban settings, the situation is more difficult.”

In terms of the overall health situation of Syrian refugees, the UNHCR report shows a “mixed” picture. Syrian refugees are not reported to be suffering from high rates of mortality and acute malnutrition. Mortality at the Za’atri camp in Jordan, for example, is reported at 0.1 per 1,000 people per month, while global acute malnutrition in children below five years is less than 5.8 per cent – neither rate being outside norms seen in the region. This is in contrast to many other humanitarian situations in other parts of the world.

“However, preventive services, chronic disease treatment and expensive referral care are not sufficiently provided at a cost that refugees, despite the support provided by governments and humanitarian agencies, can afford,” he said.

Meanwhile, at a reception and concert in New York last night for Syrian children, Secretary-General Ban Ki-moon recalled his visit to Za’atari camp last December. He was struck by how many children there were, lining the road “cheering, running and full of fun and mischief.”

Yet, he said, there was no disguising that their lives had been massively disrupted. “Most had fled with their families with only what they could carry. Many had witnessed or ensured unspeakable atrocities.” Almost 2 million children are internally displaced, and more than 600,000 have fled Syria as refugees, he added.

With no end to the conflict in sight, the Secretary-General called on the Security Council and countries in the region to come up with a unified position that can persuade all actors to come to the negotiating table. “We risk an entire generation of children being scarred for life. The children of Syria are our children. They need our help,” he implored. 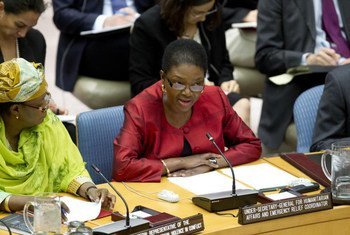