The top United Nations political official today reiterated the importance of the political process in Mali at a high-level meeting with senior UN and Government officials, while UN aid agencies urged more funding to assist the hundreds of thousands of Malians driven from their homes.

“We should redouble our efforts to ensure that the political process, which is key to Mali’s stability in both the short and long term, is not overshadowed by the equally essential military operations underway,” Under-Secretary-General for Political Affairs Jeffrey Feltman told the fourth meeting of the Follow-Up and Support Group on Mali held in the West African country’s capital, Bamako.

The meeting also included representatives from the African Union, European Union and the Economic Community of West African States (ECOWAS).

In his remarks, Mr. Feltman also discussed the challenges ahead in the holding of presidential elections are tentatively scheduled for 7 July and legislative elections on 21 July.

“We call on the international community to step in and provide timely financial and logistic support for the elections,” Mr. Feltman said, noting the UN is intensifying its efforts in support of preparations for “free, fair, transparent and credible polls” in keeping with international standards.

“We hope that ongoing security operations as well as the appointment of the Commission for Dialogue and Reconciliation will help overcome these challenges and pave the way for inclusive and credible elections,” the UN political chief added.

Mr. Feltman also noted that UN Security Council was expected to make decisions “soon” on the options presented in the latest report of the Secretary-General on Mali, which include the establishment of a possible UN peacekeeping mission in the country.

“So far we have received only 32 per cent of this amount,” UNHCR spokesman Adrian Edwards told journalists in Geneva.

The funding would provide for the expansion and construction of transit centres, provision of supplementary and therapeutic food, shelters and other relief items, and delivery of basic services such as health care, water and sanitation and education, Mr. Edwards said.

UNHCR expects an additional 45,500 refugees during the remainder of the year, based on existing rates of arrival.

“Many recent arrivals are in worse condition than the refugees who arrived in 2012, requiring immediate relief and attention,” Mr. Edwards said quoting information from UN staff on the ground.

He added that the situation is aggravated by prevailing food insecurity due to the ongoing drought and series of crop failures affecting the entire Sahel region, which includes Mali.

Also today, the UN Children’s Fund (UNICEF) announced that it has a funding gap of 76 per cent or just over $20 million to meet emergency needs of Malians in 2013.

UNICEF’s priorities in northern Mali over the coming months are to get more than 300,000 children back into classrooms after 15 months without school, as well as to prevent malnutrition and strengthen child protection systems, the agency’s spokesperson Marixie Mercado said in Geneva.

“Most schools had been looted, and infra-structure damaged,” Ms. Mercado said. “Half of health facilities were not working. Water supply was poor and of poor quality. The vast majority of teachers and health workers were still not at their posts, especially outside of urban zones.”

Education in Mali is also on the agenda in Washington DC. Secretary-General Ban Ki-moon and his Special Envoy for Education, Gordon Brown, are hosting discussions on the sidelines of the World Bank-International Monetary Fund spring meeting to boost the quality and equality of education, focusing on Mali and seven other countries. 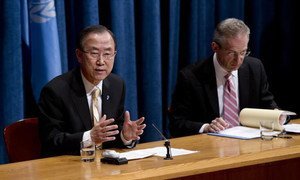 Both in Syria where conditions are daily worsening, and in Mali where security has much improved, a political solution is the only answer for long-term stability, Secretary-General Ban Ki-moon said today in a news briefing that touched on crisis flashpoints around the world.