In his message to the opening of the Seventh Regional Environmentally Sustainable Transport Forum in Asia and Global Consultation on Sustainable Transport in the post 2015 Development Agenda, the Secretary-General commended delegates for discussing next-generation transport systems for the 21st century.

“On a global scale it is essential that we better design and build transport infrastructure to make it safer and more environmentally friendly, and to minimize vulnerability to climate change and natural disasters,” stressed Mr. Ban, who also said he would “welcome” the forum’s ideas and suggestions on defining “a transformative post-2015 development agenda.”

The two-day meeting, held in Bali, Indonesia, will explore a variety of issues related to transport in relation to the outcome of the 2012 UN Conference on Sustainable Development, known as Rio+20 under the theme Next Generation Transport System We Want for 21st Century~ Looking Beyond Rio+20.

Topics include the promotion of public bicycle schemes, greenways initiatives for converting road space into leaner parks and high quality pedestrian areas, and the full integration of public transport modes.

In addressing the importance of sustainable transport, Mr. Ban also noted that access to goods and services through efficient means was “essential” not only in preserving the environment but also in reducing poverty.

“In both urban and rural areas, better land-use and transport system planning makes a great difference in facilitating access to jobs, goods and services for men and women alike. It also helps improve road safety and reduce traffic accidents and fatalities,” he continued.

Echoing this point in a message delivered today to Brazil’s National Association of Mayors, the Secretary-General also urged Brazil’s local officials to renew their commitment to developing sustainable cities in order to ensure better lives for the growing numbers of people who inhabit the world’s urban environments.

“As agreed at the Rio+20 Summit, and as can be seen day by day through the innovative steps being taken in the world’s cities and towns, local Governments have a crucial role to play in steering the world towards a path of truly sustainable and equitable urban development,” Mr. Ban said in a message delivered by Giancarlo Summa, the UN Resident Coordinator in Brazil.

“We need your dynamism in accelerating our work to achieve the Millennium Development Goals by the 2015 deadline,” he continued. “We need your vision in addressing climate change, a paramount threat. And we need your voices to be heard as we define a transformative post-2015 development agenda.” 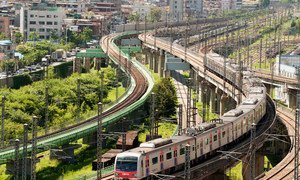 Senior officials from over 30 Asia-Pacific nations are meeting at a United Nations-backed forum in Bangkok to review progress towards a sustainable and efficient regional transport network.