11 April 2013
A sharp surge in the price of dairy products pushed the overall costs of food one percentage point higher in March, the United Nations reported today, while world wheat production remained on track to reach its second highest level ever, barring adverse weather.

A sharp surge in the price of dairy products pushed the overall costs of food one percentage point higher in March, the United Nations reported today, while world wheat production remained on track to reach its second highest level ever, barring adverse weather.

Releasing its latest monthly Food Price Index (FPI), the UN Food and Agriculture Organization (FAO) said the dairy component of the index, which carries a 17 per cent weight in the overall calculations, jumped by 22 points to 225, one of the largest recorded changes, due to hot, dry weather in Oceania that has cut into the production of milk and its various by-products.

The dairy prices used in FPI are based on the exports of New Zealand, the world's largest dairy exporter, accounting for about one third of global trade. Export prices for dairy products have also risen for other important exporters, such as the European Union and the United States, but not to the same degree.

“The exceptional increase is in part a reflection of market uncertainty as buyers seek alternative sources of supply,” FPI reported. “In addition, dairy output in Europe has yet to come fully online after a particularly cold winter, which has delayed pasture growth to feed dairy animals.”

“World cereal production in 2013 could recover strongly barring unfavourable weather in major producing regions,” it said, maintaining its March outlook that global wheat production this year is expected to increase by 4 per cent to 690 million tonnes, the second highest ever after the 700 million tonnes produced in 2011.

The FAO slightly revised the 2012 crop production estimate upward by nearly 3 million tonnes, which now stands 2 per cent lower than the record set in 2011. 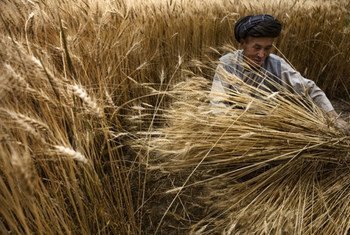 7 March 2013
World food prices have held steady for another month with falling cereal and sugar prices offsetting gains in vegetable oils and dairy, the United Nations Food and Agriculture Organization (FAO) today said, while also pointing to what could be a record wheat crop this year.