Global food prices down for second straight month in May, UN agency reports

The United Nations Food and Agriculture Organization (FAO) reported today that global food prices were down for the second straight month in May and that the outlook for worldwide cereal supply has improved considerably since last month.

FAO's Food Price Index continued its decline from the 10-month high it experienced in March, the agency said in a news release, noting that prices fell as generally ample supplies weighed on international prices for most commodities included in the Index.

The Index – which measures monthly changes in global prices of a basket of meat, dairy, cereals, oils and fats, and sugar – averaged 207.9 points in May 2014, down 2.5 points from April.

According to FAO, the Index had risen to a ten-month high of 213 points in March, but fell in April and May amid lower dairy, cereal and vegetable oil prices. Sugar prices went against the trend, making strong gains in May, while meat remained firm.

The Cereal Price Index was down 2.4 points in May, as compared to April, with the decline mostly triggered by maize prices, which fell in response to favourable growing conditions and good supply prospects in 2014/15.

Wheat prices, which had contributed to price increases in previous months, partly amid fears of disruptions to trade flows from Ukraine, also fell, while rice prices saw little change.

“We went into May with concerns over unfavourable weather conditions, especially in the US, and geopolitical tensions in the Black Sea region, but towards the second half of May, we began to see lower wheat prices following improved weather conditions and the continuation of regular shipping patterns from the Ukraine,” said FAO Senior Economist Abdolreza Abbassian.

Vegetable oils were down 3.7 per cent from April, reflecting lower quotations of palm, soy and grapeseed oils.

Meanwhile, after a period of limited export supplies and exceptionally high prices in 2013 and early 2014, the market for dairy commodities is undergoing some “adjustment” as the production outlook improves. The Dairy Price Index in May declined 12 points over April.

Meat prices remained nearly unchanged from April, while sugar was up 9.3 points amid early forecasts of a possible production deficit for the 2014/15 season and El Niño-related weather concerns.

FAO's monthly update on the world cereal market, the Cereal Supply and Demand Brief, puts world cereal production in 2014 at nearly 2,480 million tonnes, almost 1 per cent higher than was reported in May, though still 1.4 per cent down from 2013. 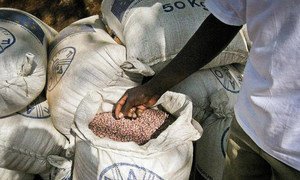 The cost of food worldwide has surged in March to its highest peak in 10 months, the United Nations Food and Agriculture Organization (FAO) reported today.