10 April 2013
Secretary-General Ban Ki-moon today honoured one of his predecessors Dag Hammarskjöld and thousands of other United Nations personnel who lost their lives serving under the blue flag, as he marked the 60 years since Mr. Hammarskjöld took the helm of the world organization.

Secretary-General Ban Ki-moon today honoured one of his predecessors Dag Hammarskjöld and thousands of other United Nations personnel who lost their lives serving under the blue flag, as he marked the 60 years since Mr. Hammarskjöld took the helm of the world organization.

“Today’s commemoration is a reminder of the dangers facing those who serve the UN,” the Secretary-General said during a commemoration at UN Headquarters in New York.

In September 1961, Mr. Hammarskjöld was killed in a plane crash, along with 15 other people, en route to ceasefire negotiations in Northern Rhodesia, now Zambia.

Mr. Ban noted that a dozen UN peacekeepers were killed just a few days ago, on 9 April, defending civilians during an ambush in South Sudan. Commending them the other UN staff and blue helmets killed, he said that their legacy continues “thanks to the many others who carry on our collective work of peace.”

Taking the oath, he said he was devoting himself “without any reserve to the work carried out by the United Nations Organization in pursuit of its high aims. I am here to serve you all, in so doing I shall count on your understating, on your advice and on your will to give to what I have to say the attention that it may deserve.”

He noted that the UN was created out of the “pain and turmoil of the last war” and brought together what should be continued cooperation for world peace, including all those who fought against oppression and who made sacrifices for freedom and peace.

Noting the challenges he was about to undertake, Mr. Hammarskjöld told the General Assembly, “It is for you to judge me how I succeed, it is for you to correct me if I fail.”

Concluding his speech, he quoted a Swedish poet, “The greatest prayer of man is not for victory, but for peace.”

Excerpts from the installation and acceptance speech - 10 Apr 1953

At his tribute today, Mr. Ban drew similarities between Mr. Hammarskjöld and the challenges faced by all Secretaries-General, concerning “questions about responsibility toward the millions of people who look to the United Nations for help in ending the misery of war, poverty and repression,” about how to enable governments to see their national interests in the global perspective, and about the UN’s lasting impact.

Also participating in today’s commemoration were high-level officials and key people who knew Mr. Hammarskjöld, including Sir Brian Urquhart, who was his former advisor and Under-Secretary-General and helped him respond to the Suez Crisis, which sparked what would turn out to be the first UN peacekeeping mission.

“I think Hammarskjöld was the most impressive international leader so far anywhere. He was quite remarkable and he was genuinely international and I think he was a person of some genius which has created this flame which is still running, more or less,” Mr. Urquhart told the UN News Centre. 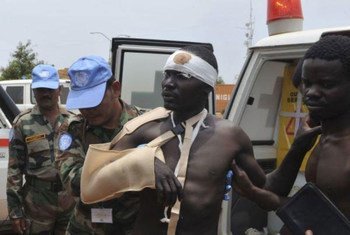