UNMISS/Isaac Billy
A wounded civilian arrives in Juba after an ambush on an UNMISS convoy by unidentified assailants near Gumuruk in Jonglei State (April 2013).

“The Secretary-General is appalled by the attack,” his spokesperson said in a statement. “He condemns in the strongest terms the killing of five Indian peacekeepers and two UNMISS (UN Mission in South Sudan) national staff and five civilian staff contractors.”

Mr. Ban “recalls that the killing of peacekeepers is a war crime that falls under the jurisdiction of the International Criminal Court,” the spokesperson said

“He calls on the Government of South Sudan to bring the perpetrators of this crime to justice,” the statement continued.

In their separate statements, Mr. Ban and Ms. Johnson expressed their deepest condolences to the families of the peacekeepers, colleagues and civilians killed in the attack, as well as the Governments of India and South Sudan.

“At least nine additional peacekeepers and accompanying civilians were injured, and some remain unaccounted for,” according to the latest information from UNMISS.

The Department of Peacekeeping Operations (DPKO) in New York said about 30 peacekeepers were escorting a civilian convoy when they were ambushed by some 200 armed, unidentified men near the settlement of Gumuruk in Jonglei.

Speaking from Juba, Ms. Johnson said the UN Mission remains resolute in assisting the people of South Sudan, “This attack will not deter UNMISS and its peacekeepers from working to protect vulnerable communities in South Sudan.”

“UNMISS is determined to continue its work in supporting authorities ensure peace,” she added.

In a press statement read out on behalf of the 15-member Security Council, Ambassador Eugène-Richard Gasana of Rwanda, which holds the rotating presidency of the UN body for the month of April, reiterated “full support to UNMISS and the troop contributing countries” in South Sudan.

The UN has been increasingly vocal in recent weeks about the need for increased protection of civilians in Jonglei state.

South Sudan faces considerable security challenges, in particular, in Jonglei state and the tri-state area of Lakes, Warrap and Unity.

Last week, the UN mission released its findings into a probe of a cattle raid on an 8 February attack near Walgak in West Akobo in which at least at least 85 cattle herders, mostly women and children, were killed.

According to a Spokesperson for the Office of the UN High Commissioner for Human Rights (OHCHR), the UNMISS investigation found that a group of armed men, allegedly members of the Murle community, attacked the Lou Nuer pastoralists as they were migrating to grazing areas.

The OHCHR Spokesperson called on the South Sudanese authorities to immediately launch an investigation into this gruesome attack and bring the perpetrators to justice in order to end the cycle of violence and prevailing impunity.

UNMISS said the attack represented the highest single loss of life since an increase in inter-communal violence began several months ago.

Speaking to journalists yesterday in Juba, Ms. Johnson had urged the Government and the local communities to break the deadly cycle of violence spurred by inter-communal violence and attacks by armed groups, “The destabilization of Jonglei must stop.” 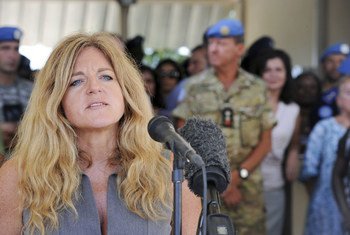 8 April 2013
The top United Nations official in South Sudan today urged authorities and communities in Jonglei state to take all necessary steps to prevent inter-communal violence and attacks by armed groups which are threatening civilians and spurring a deadly cycle of violence.