IRIN/Maria Font de Matas
Migrants, such as these workers in Jordan, send remittances to their home countries.
9 April 2013

An estimated 600,000 migrant workers are tricked and trapped into forced labour across the Middle East, the United Nations International Labour Organization (ILO) today reported at the first regional conference on human trafficking, highlighting in particular the visa sponsorship system between in-country employers and workers.

“Labour migration in this part of the world is unique in terms of its sheer scale and its exponential growth in recent years,” Beate Andrees, head of ILO’s Special Action Programme to Combat Forced Labour, said at the start of a two-day conference on the topic in Amman, Jordan.

“The challenge is how to put in place safeguards in both origin and destination countries to prevent the exploitation and abuse of these workers,” Ms. Andrees told the more than 100 participants from a dozen Arab countries.

The report ILO is presenting, “Tricked and Trapped: Human Trafficking in the Middle East”, was based on more than 650 interviews conducted over a two-year period in Jordan Lebanon, Kuwait and the United Arab Emirates (UAE) about how the workers are ‘tricked and trapped’ into forced labour and sexual exploitation, and the constraints that prevent them from leaving.

The two-day meeting in Amman is expected to focus on how to put into practice international anti-trafficking commitments by examining the policies currently on the books.

“Human trafficking can only be effectively tackled by addressing the systemic gaps in labour migration governance across the region,” said Frank Hagemann, ILO Deputy Regional Director for the Arab States.

The Middle East hosts millions of migrant workers, who in some cases exceed the number of national workers substantially.

In Qatar, for example, 94 per cent of workers are migrants, while in Saudi Arabia that figure is over 50 per cent, according to ILO. Meanwhile, in Jordan and Lebanon migrants also make up a significant part of the workforce, particularly in the construction and domestic work sectors.

Those industries are particularly susceptible to abuse due to the Kafala or sponsorship system. Most migrant workers need to be sponsored by their in-country employer for visa and legal status, a system the ILO calls “inherently problematic” because it creates an unequal power dynamic between the employer and the worker.

The report points to deficits in labour law coverage that “reinforce underlying vulnerabilities of migrant workers” as well as significant gaps in national legislation that “restrict the ability of migrant workers to organize, to terminate their employment contracts and to change employers.”

The authors noted that the lack of inspection procedures maintains the “isolation of domestic workers in private homes” and heightens their vulnerability to exploitation. While in male-dominated sectors, such as construction, manufacturing, seafaring and agricultural sectors, workers are routinely deceived with respect to living and working conditions, the type of work to be performed, or even the existence of a job at all, ILO reported. 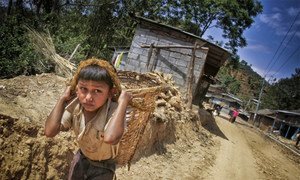 Ahead of an upcoming international meeting on forced labour, the United Nations today released a new report highlighting the need for tougher efforts to prevent, identify and prosecute cases of forced labour which claim 21 million victims worldwide.