UNIPSIL
Secretary-General Ban Ki-moon (right) meeting with amputees during a visit to Sierra Leone in June 2010.

26 March 2013
The Security Council today extended the United Nations mission in Sierra Leone until 31 March 2014, by when it should be fully drawn down and its responsibilities transferred to the UN country team.

In a unanimously adopted resolution, the Council requested Secretary-General Ban Ki-moon to keep the 15-member body regularly informed of the developments on the ground in the country and to submit a report, no later than 15 September 2013, providing an update on the planned completion of the mandate of the UN Integrated Peacebuilding Office in Sierra Leone (UNIPSIL).

In a recent report to the Council, Mr. Ban wrote that the next 12 months are “critical” for the mission to consolidate the gains it has accomplished so far by refocusing its mandate on the three main remaining areas.

These are: good offices and the facilitation of political dialogue towards a constitutional review process and towards strengthening conflict prevention and resolution processes; security sector support; and strengthening of human rights institutions.

“This period is also critical to transition the mission’s residual tasks seamlessly to the United Nations country team and to ensure that the latter has adequate resources,” he added.

Mr. Ban noted that Sierra Leone has made significant progress since the end of its civil war in 2002, with the support of the UN.

“Over the 15 years of its operations in Sierra Leone, the United Nations supported the Government, civil society organizations and national institutions and organizations in the implementation of peace agreements, the holding of three free, fair and credible elections, national recovery, transition to a more comprehensive peacebuilding agenda, promoting good governance and human rights, and building the capacity of national institutions,” he said.

However, despite the real signs of progress in the country, there are serious residual challenges, including strengthening the capacity of security sector agencies, combating transnational organized crime and drug trafficking and the proposed constitutional review process.

“Support in addressing these challenges will require a reconfiguration of the mandate of the United Nations Integrated Peacebuilding Office for Sierra Leone,” he stated, adding that it will be important to ensure that there are adequate resources, including logistical capabilities, to enable the UN country team to carry out additional activities and programmes during the transition of UNIPSIL and after its liquidation. 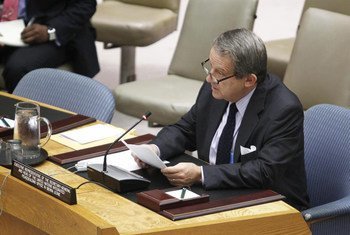 13 March 2013
A United Nations official today praised the progress made by Sierra Leone since the end of its civil war 10 years ago, and stressed that the country must continue to strengthen its institutions to maintain the achievements made during its transition process.