A United Nations official today praised the progress made by Sierra Leone since the end of its civil war 10 years ago, and stressed that the country must continue to strengthen its institutions to maintain the achievements made during its transition process.

“[Sierra Leone] has made significant progress since the end of the war over a decade ago. During this period, Sierra Leone was able to restore and consolidate State authority, implement national recovery programmes, including extension of public services, as well as undertake reforms in the governance and security sectors,” the Secretary-General’s Executive Representative in Sierra Leone, Jens Anders Toyberg-Frandzen, told the Security Council.

For 11 years, Sierra Leone was torn by a civil war after the rebel Revolutionary United Front intervened in an attempt to overthrow the country’s then-President Joseph Momoh. The conflict, which lasted from 1991 to 2002, was often punctuated by acts of extreme brutality as marauding bands of armed youths terrorized the countryside, conscripting child soldiers and used the amputation of limbs as an intimidation method against civilians.

In November 2012, the country successfully held national presidential, parliamentary and local council elections. They were the third since the end of the country’s civil war, and the second since the withdrawal of the peacekeeping operation known as the UN Mission in Sierra Leone (UNAMSIL) in December 2005.

That mission was replaced by various other UN offices, most recently the UN Integrated Peacebuilding Office (UNIPSIL), which focuses on political and development activities.

“The strong commitment of the people of Sierra Leone and its successive post-conflict governments has been indispensable to the achievements made by the country and to the successful work of the United Nations over the last 15 years,” Mr. Toyberg-Frandzen said in his presentation of the Secretary-General’s report on UNIPSIL.

However, he also warned that challenges remain and require greater efforts by national stakeholders and the international community’s continued engagement.

Country institutions that underpin the democratic process such as the National Electoral Commission must be strengthened, he said, and the State must ensure it has an inclusive government system that addresses the root causes of the conflict, including ethnic tensions.

“It is essential that the planned constitutional review be an inclusive process that ensures the buy-in of all key stakeholders,” he said, adding that it essential to get the transition right by scaling up the support of the UN and the international community for the country’s continued development. 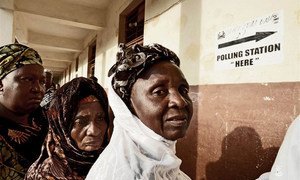 United Nations Secretary-General Ban Ki-moon today congratulated Ernest Bai Koroma on his win in Sierra Leone’s presidential election, and called on him and all political leaders in the country to maintain calm and work towards unity and reconciliation.