In a statement issued last night, the Council strongly condemned the recent attacks by the Séléka rebel coalition, as well as the ensuing violence and looting which resulted in several deaths and injuries to South African soldiers who had been deployed to the CAR at the request of the Government.

The Council emphasized that “those responsible for violations and abuses of international humanitarian and human rights law, including violence against civilians, sexual and gender-based violence and recruitment and use of children in armed conflict, must be held accountable.”

Members of the Council also called on parties to allow safe and unhindered humanitarian access as well as to fully respect international human rights law.

Fighting flared up again in CAR in December 2012 when the Séléka rebel coalition launched a series of attacks. The fighters took control of major towns and were advancing on Bangui, before agreeing to start peace talks under the auspices of the regional group known as the Economic Community of Central African States (ECCAS).

A peace agreement was reached on 11 January in Libreville, Gabon, resulting in a ceasefire agreement and creating a government of national unity in which opposition figures were given key posts, but the rebels claim the Government is failing to live up to its commitments.

Yesterday, the African Union (AU) suspended the CAR’s participation in all its activities, and sanctioned the Séléka leaders, noting that their actions violate the recent as well as previous agreements reached in Libreville and jeopardize the precarious stability in the country.

Members of the Council called for the restoration of the rule of law, constitutional order and the implementation of the Libreville agreements, and recalled that according to these, the Government of national unity is in charge of holding legislative elections.

They also reaffirmed the role of the ECCAS in facilitating the implementation of the agreements with the support of the AU, and said they would monitor the situation closely.

Meanwhile, the UN Children’s Fund (UNICEF) warned that children in the country are increasingly vulnerable as thousands have been left without adequate access to basic services in the wake of the rebels’ attacks.

“Most vulnerable are children who have lost their home, have been separated from their families, or were formerly associated with armed groups,” said UNICEF spokesperson Marixie Mercado. “Lack of access over the past months has been a huge block to humanitarian efforts. Roads are blocked; there is presence of armed groups and the risk of pillage. UNICEF offices in Kaga Bandoro were completely looted,” she told a news conference in Geneva.

The agency said in most of the rebel-controlled areas, health activities have been disrupted while many schools have been closed or taken over by armed groups. Nearly 14,000 children are expected to suffer from life threatening malnutrition following the looting and closure of nutritional centres.

Ms. Mercado also warned that UNICEF has received reports that rebel groups and pro-Government militias have been actively recruiting children into their ranks. 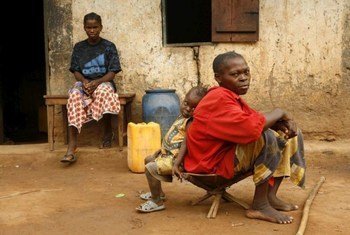